Movie about two people with springs for legs

It was a computer animated film, probably on DVD, might've been VHS. It's rather old, I think. It's about this carousel thing that broke somehow. There was this little girl and her dog, the latter character being the main character (and I'm pretty sure the film's name is this character's name). Right, so, after the carousel broke, there were these two people who (emerged?) from it, the people with the springs. One controlled fire, and the other controlled ice. If I remember correctly, the guy who controlled fire lead some people to go find these crystals scattered around the world to repair the carousel. That's really all I remember, I am just looking for the name of the movie.

Dougal, aka The Magic Roundabout. Dougal is the dog, Florence his owner. 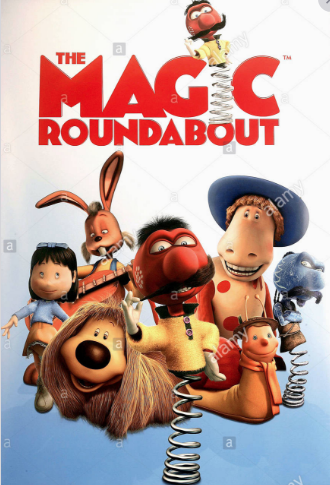 The film begins as the wizard Zebedee, a red jack-in-the-box-like creature, is having a nightmare about being chased by a rampaging blue jack-in-the-box creature named Zeebad.

Dougal accidentally starts the cart up again and causes it to crash into the titular magic roundabout at the centre of the village. A blue jack-in-the-box creature named Zeebad (the same one from Zebedee's nightmare) emerges from the top [of the carousel] and flies away, followed shortly after by a Foot Guard figurine that is thrown off the roundabout.

Zebedee ... explains that the roundabout acted as a mystical prison for the evil ice wizard Zeebad.The only way to stop Zeebad's freedom from freezing the world again is by collecting three magic diamonds (one of which is supposed to be hidden on the roundabout, while the other two are hidden at separate locations far beyond the village); placing all three diamonds in their respective slots on the roundabout will re-imprison Zeebad and undo his magic, but if Zeebad retrieves them first then their power will allow him to freeze the Sun itself.

A plot summary from IMDB:

Legend tells of three magic diamonds that, if in the wrong hands, can be united to create a force powerful enough to freeze the sun. When the evil sorcerer Zeebad escapes from his ancient prison, he vows to exact revenge by deep-freezing the earth forever. Determined to save the world, a fellowship of four unlikely heroes band together to foil Zeebad's villainous plot. Led by the candy-loving mutt Doogal, friends Dylan, Brian, and Ermintrude all embark on an epic adventure to save the world. In order to find the diamonds before Zeebad, they must climb icy mountains, navigate fiery pits of molten lava, sail across vast oceans and pass through a booby-trapped temple guarded by an army of ninja skeleton warriors. Along the way they learn that the most powerful weapon is their friendship - which even Zeebad's evil magic cannot destroy.

10
Help with title of an old Japanese anime about a quest involving magical creatures?
13
An animated movie about a dwarf or gnome that seems to be good but turns evil by killing the bad guy with a gun at the end
18
Looking for a book series about a girl and her friends captured and sold as slaves
8
Fantasy book series about persecuted people with elemental magic powers
5
80s/90's Robot cartoon, one like a Transformer
5
Manga about a guy and a female alien fighting other aliens that are based on types of gems
7
Old animated movie about anthropomorphic animals (lion prince in love with enemy girl while engaged to snake princess)