Where is Barry Allen of Earth-X?

In the mega crossover of the CW-verse, on Earth-X, we see the evil counterparts of the Arrow (as Dark Arrow), Supergirl (as Overgirl), and counterparts of almost everyone except Barry Allen.

Well, Reverse Flash is present to fulfil a speedster's position. Is there any mention about Earth-X's Barry Allen and/or his whereabouts?

tl;dr - There may not be a Barry Allen on Earth-X, and he may have never gotten powers if there were.

While there are (theoretically) doppelgangers of all people on the various Earths, that's not a guarantee. Notice that while there is a Supergirl on Earth-X, there is no Supergirl on Earth 1, and none of the other heroes of Earth 1 on Supergirl's Earth. Her Earth has no speedsters at all.

Also, when they do have parallel people, their lives are not always identical - note the Hunter Zolomon of Earth 1.

If there was no STAR Labs of Earth X, and no accelerator explosion, their Barry Allen, if he even existed, would not have gotten his powers, nor would any of the people who got theirs the same way. Snart didn't get his via the explosion, so he's unaffected.

This would also explain why Ebobard Thawne is the one from Earth 1, and not from Earth-X's future - no Flash, no desire for future-Thawne-X to want to emulate him.

In the canon animated web series that preceded "Crisis on Earth X," Freedom Fighters: The Ray. In it, the character Blizkrieg represents the Earth X version of Barry Allen. Voiced by Scott Whyte as opposed to Grant Gustin, he is the speedy member of the New Reichsmen. He is captured and incarcerated by the Freedom Fighters, explaining the need for him to be replaced by Reverse-Flash. 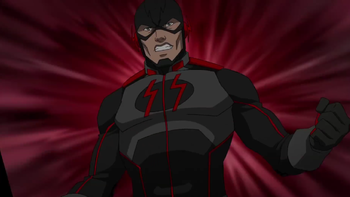 6
When did Barry Allen meet Felicity Smoak for the first time?
3
The Flash S02E20 : What does 'Barry Allen is trapped in speed force' means?
2
How did Hartley Rathaway know about Wells being The Reverse Flash?
5
Who are these speedsters in The Legion of Doom (Season 2 Episode 10)?
6
How can keeping one's secret identity from a friend or beloved actually help protecting her or him?
3
What does Gideon say Barry Allen is the founding member of?
9
How did Green Arrow manage to make that arrow in the Crisis on Earth-X crossover?
4
Did Barry Allen and Felicity Smoak have a past relationship?
4
What dead superheroes were on Earth-90?