I'm searching for a western animated TV show about a mixed-gender group of kids who gain powers of a variety of Halloween monsters (The only one I'm certain of is that one of the girls gets to be a witch). This originally aired no later than some time in the 90s.

I think some kind of dark force was going to attack their town, and they had to figure out a way to stop it, possibly centering around an old church or cathedral. One line I recall distinctly was one of the girls said something like "I'm still a witch, so I've got the wits; so I know how to solve this problem". The show had previously mentioned that that "witch" and "wit" were cognates.

I'm pretty sure this is The Halloween Tree based on Ray Bradbury's book.

As the summary states, they are taken to Notre Dame cathedral at one point, so your church is there. Each child is dressed as a typical Halloween creature--witch, skeleton, mummy, monster.

I found this quote on Goodreads from the novel:

But, stop and think. What does the word ‘witch’ truly mean?” “Why—” said Tom, and was stymied. “Wits,” said Moundshroud. “Intelligence. That’s all it means. Knowledge. So any man, or woman, with half a brain and with inclinations toward learning had his wits about him, eh? And so, anyone too smart, who didn’t watch out, was called—” “A witch!” said everyone. “And some of the smart ones, the ones with wits, pretended at magic, or dreamed themselves with ghosts and dead shufflers and ambling mummies. And if enemies dropped dead by coincidence, they took credit for it. They liked to believe they had power, but they had none, boys, none, sad and sorry, ’tis true.

Here's the cover that may show familiar characters: 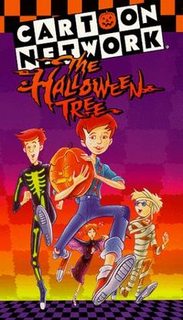 Here's a short clip from early in the story:

5
TV Show with alien conspiracy theorist, one character has "lightning" superpowers
10
Anime with a boy hiring a creature from a stone, meets a man named Dante and starts a journey to collect crystals
6
Kids TV show combining live action and animation, kids fighting monsters after entering a photo booth
11
Looking for a cartoon where three kids wake up in a different world
4
Animated TV show with futuristic vehicles used to fight monsters
11
2000s animated series: time traveling/teleportation involving a golden egg(?)
2
What is the CGI show I'm thinking of that seems eerily similar to the Voltron episode of Rick and Morty?
12
VHS cartoon with a cat-shaped hot air balloon called the Kitcataloon(sp): "It looks like a cat but it flies like a balloon!"