I really don't remember much about this movie because I saw it about 12-13 years ago when I was a kid sitting in a bar with my father who was drinking beer.

That's it. I have been struggling to find it for years.

Could it be that you're thinking of Return of the Living Dead 3 (1993), which Wikipedia describes as a "romantic-horror film". 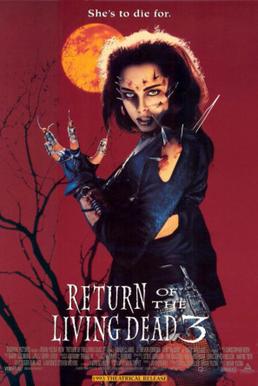 In it, Curt tries to revive his dead girlfriend Julie by turning her into a zombie, using the 2-4-5 Trioxin gas his father was experimenting with.

As Julie gets a craving for human flesh, she tries to keep herself from giving in by hurting herself, for instance by embedding shards of glass under her skin and by driving nails and other pieces of metal through various parts of her body, which you can see in the image.

When all of the zombies are captured, Curt realizes Julie is going to be used as a weapon and goes into a rage, freeing the zombies which then kill the soldiers. In the commotion the base is set on fire and Curt is bitten by a zombie. Curt's father tries to get Curt to leave but he realizes that by doing this he would be abandoning Julie, and he knows that he is infected. So, Curt and Julie go to the furnace to die together. Julie asks where they are, Curt says "where we belong" they kiss one last time and then burn.

2
Movie about an alien girl with human parents, all three trying to run away
0
Identify a modern Titanic movie having vampires
7
Sci-fi movie identification: on TV in early 2000s or earlier - cannibal alien family
10
Movie with stranded astronaut. Alien girl saves him with oxygen plants
5
Book about actress forced to disguise alien murderer
6
Sci-Fi Channel film - Alien/parasite invasion where the parasites enter through the mouth
5
80s/90s zombie(?) movie with a “stolen record” of a shower scene
11
Late 90s movie with kids in a strange house, cake burns hole in the floor, trap doors, fake walls, etc