I remember a scene where a man was on the bed with a blindfold and hands and feet tied, as for sex, and he felt pleasure, because a "woman" was kissing him, but really it was a little monster with the appearance of woman (with the size of a rat) on his breast, and she was puking leeches. The movie had others monsters such as a "man" with big arms and little head.

Sounds like the notorious Puppet Master from 1989 about evil little dolls.

Neil Gallagher found the secret to Toulon's puppets who come to life and then killed himself. Alex and his psychic friends come to investigate and are stalked by Toulon's puppets who have a variety of strange traits including a drill for a head and the ability to spit up leeches.

The movie became a franchise and produced 9 sequels. You can see the scene you've described (with the tiny leech woman and the blindfolded man) here [Warning: Graphic], and here's the doll with the tiny head and big arms (called Pinhead): 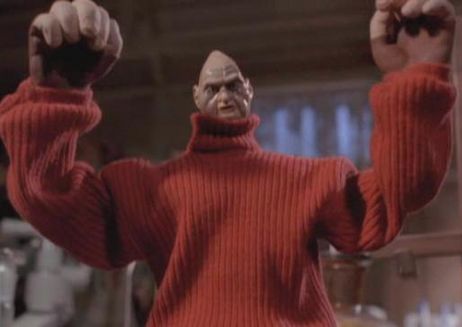 12
Movie Identification: 1980/1990's movie with flying creatures and a beautiful actress
6
Comic about “the exterminator of exterminators”
5
Horror movie 60's-70's man feeds guests to cave monster
9
Trying to identify a science fiction spoof movie about a singing alien
9
Looking for a movie about a gateway to hell
56
Short story about "the monster under her bed", where the monster protects the girl from abusive parents
5
Old movie about a group of friends with magical weapons fighting monsters
6
Japanese live action movie about a special group hunting monsters. eg Liquid Monster
6
Movie where teens escape the cops to an underground tunnel filled with monsters