Cartoon series that tells stories based on fairy tales by Grimm Brothers, Hans Christian Andersen and others

When I was a kid I think it was around early 2000s, a local TV channel aired a cartoon which oddly got stuck in my mind for only few parts of it.

As I remember, it probably tells stories based on fairy tales by Grimm Brothers, Hans Christian Andersen and others.

What really disturb me is, the only part I vividly remember was the credits (either it was opening or ending, I do not remember unfortunately). The credits showed an attic where a sparkling sunlight came in through a window.

The floor was made from wood, so as the window. Maybe before the attic part, it showed woods with wild flowers but I'm not sure about this part.

The next thing I remember the most is that the credit played Habanera of Georges Bizet or at least any other classical music but my memory plays Habanera alongside with the attic view.

I do not know when it was released, and it was colored. As I remember it was dubbed by the language of my country (Indonesia). I cannot identify the country origin, since I can only remember very little about it, but it was probably from US or Europe.

It disturbs me since I cannot recall the rest of the cartoon while my memory keep playing the attic part over and over again. I searched through Google but I found nothing.

At first I thought my memory was trying to remind me about Simsala Grimm from Germany but as I saw the opening and ending credit, there was no attic with window full of sparkling sunlight moreover the Habanera song.

I just found that! it's anime from japan called Anime sekai no dôwa, aka "The World's Most Famous Tales", by TOEI Animation. you can find the credit in YouTube with the 'that attic' I remember vividly as well. 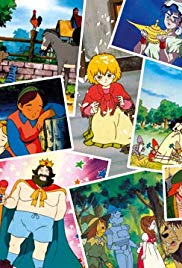 Back in the 90s Nick used to show an anime style Grimm's Favorite Fairy tales which could have been shown up to the 2000s. This was the opening. Does it look familiar?