Don't know much for sure about this story. I've never read it; only heard a review at some point in mid-nineties on Polish TV. The author may very well be Polish, but there's a chance it was a translation (Yup, I'm also asking elsewhere in Polish).

The story is set in the world with telepaths and the protagonist has secret information (or maybe is a secret agent - not sure about this) and keeps repeating a rhyme in his (her?) head which blocks telepathic prodding of their mind. One thing I'm pretty sure I remember is the rhyme in Polish (It's actually been stuck in my head since the 90s) - and in Polish it indeed rhymes (AABB - end of lines) so most likely the translation was not literal. Re-translated back to English it would be something like:

one - two - three and four
sultan liked bayaderes,
five - six - seven - eight
he liked to cock a snook at everyone.

Other than the exact text of the rhyme, it sounds like a perfect match for Alfred Bester's The Demolished Man. The main character wants to commit a crime in a world of telepaths and needs to keep it secret, so he fills his head with a catchy bit of verse -- a mindworm.

If this is indeed the right story, I'm guessing that the translators gave up on anything like a literal translation and tried to make something up in Polish which had the same effect.

This is indeed, Alfred Bester's 'The Demolished Man' where the protagonist Ben Reich plans the murder of a business rival. He uses a 'jingle' from an associate songwriter that acts as an earworm to block his murderous intentions from Espers. 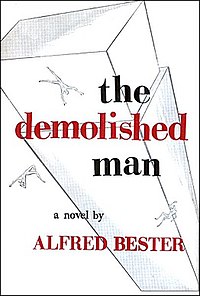 Reich contacts D'Courtney and proposes a merger of their concerns but Reich's damaged psychological state causes him to misread D'Courtney's positive response as a refusal. Frustrated and desperate, Reich determines to kill Craye D'Courtney. The presence of peepers has prevented the commission of murder for more than 70 years so Reich devises an elaborate plan to ensure his freedom. If caught Reich will certainly face "Demolition", a terrible punishment described only at the end of the story.
[...] To further conceal his intentions from telepaths, Reich visits a songwriter, Duffy Wygand (spelled "Wyg&" in the text) who teaches him a deceptively simple jingle:
Eight, sir; seven, sir;
Six, sir; five, sir;
Four, sir; three, sir;
Two, sir; one!
[...]
This proves to be an earworm, so persistent and involving that it blocks most Espers from properly peeping into Reich's mind.

The "wall used to block thoughts" trope is also used in the Village of the Damned (1960 film). A brood of children, all born on the same day, has been fathered (!) by aliens. The film is adapted from the novel The Midwich Cuckoos (1957) by John Wyndham. https://en.wikipedia.org/wiki/Village_of_the_Damned_(1960_film)

Not the answer you're looking for? Browse other questions tagged story-identification telepathy or ask your own question.

10
Trying to remember a short story about telepathy
9
To what story is Harlan Ellison referring?