What is Captain America's religion?

In the Avengers movie this conversation occurs between Captain America and Black Widow:

Steve Rogers: Ma'am, there's only one God, and I'm pretty sure he doesn't dress like that.

So it appears that Cap is at the very least a monotheist, but are there any confirmed specifics?

Marvel Cinema Earth's Captain America religion has not been explicitly stated, but it is mentioned he is a monotheist and most likely Christian.

The Captain America of the canon Marvel Earth #616 has been listed as devoutly Protestant. Images of Earth #616's Captain America engaged in religious activity are limited partially due to the ambiguous stance of comics and religion in the 1940's. When the 1960's came about the Captain was portrayed as staunch and upright with a limited understanding of modern culture and language.

The Ultimates Captain America (Earth #1610) is also listed as and often depicted as devotely religious attending services every Sunday it's possible to do so. 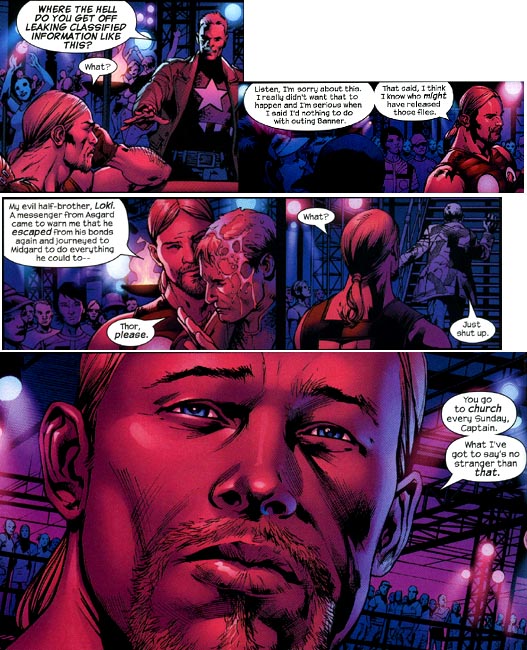 Captain America is certainly Christian, and most likely Protestant.

Whilst there is no evidence on the movie version of Captain America (from universe #199999) we can inform ourselves by looking to the comics: I found this information on Captain's Comic Book Religion page, which led me here and quotes the same newsweek source as Thaddeus.

Though I can find nowhere that explicitly states he is protestant, it doesn't seem like too much of a stretch.

I'm fairly certain he's Catholic, primarily because his parents Sarah and Joseph Rogers were Irish immigrants. Statistically, they would have probably been Catholic, though of course there are plenty of Protestants in Northern Ireland.

I would say that James Buchanan Barnes would be Scottish, and therefore probably Presbyterian (Protestant) though likewise, there are Scots Catholics.

There seems to be an idea that both of them were orphans in a Catholic run orphanage, but I don't know where that comes from.

He's Catholic, he comes from an Irish Catholic family from the lower east side of Manhattan. Also in the movies Brooklyn seems to be the theme as it was exclusively Catholic and Jewish with Protestant Afro American communities.

Not the answer you're looking for? Browse other questions tagged marvel movie comics captain-america religion or ask your own question.

29
Religion in the Marvel universe?