Was Cyrodiil a jungle before the Third Era?

Is this a retcon? Is The Elder Scrolls Online canon at all? 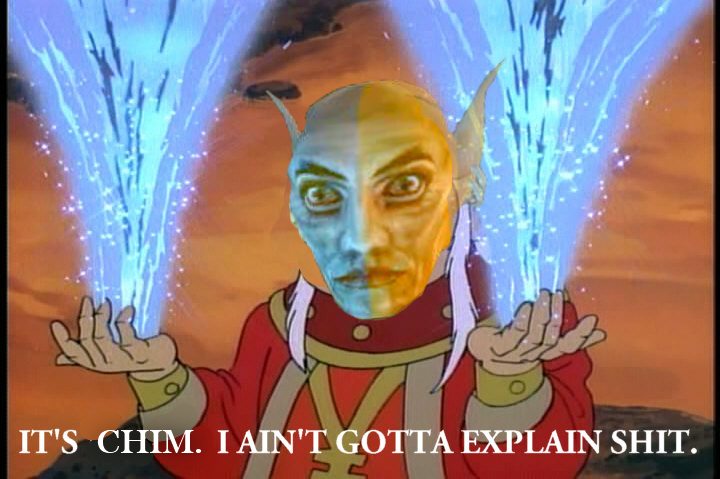 Yes - and no. It is heavily implied that Talos changed reality when he ascended to Godhood, so that Cyrodiil was never a jungle. So before Talos ascended it was a jungle but since he ascended it has never been a jungle. This is the same way in which reality was changed so that the Tribunal have always been gods.

CHIM. Those who know it can reshape the land. Witness the home of the Red King Once Jungled.

Before Oblivion, Cyrodiil was unambiguously a jungle

Before The Elder Scrolls IV: Oblivion was released, all accounts of Cyrodiil were that it was definitely a jungle. (Emphasis in this and subsequent quotes are mine).

Indeed, if the history of the Nords is the history of humans on Tamriel, then Cyrodiil is the throne from which they will decide their destiny. It is the largest region of the continent, and most is endless jungle. Its center, the grassland of the Nibenay Valley, is enclosed by an equatorial rain forest and broken up by rivers. As one travels south along these rivers, the more subtropical it becomes, until finally the land gives way to the swamps of Argonia and the placid waters of the Topal Bay. The elevation rises gradually to the west and sharply to the north. Between its western coast and its central valley there are all manner of deciduous forest and mangroves, becoming sparser towards the ocean. The western coast is a wet-dry area, and from Rihad border to Anvil to the northernmost Valenwood villages forest fires are common in summer. There are a few major roads to the west, river paths to the north, and even a canopy tunnel to the Velothi Mountains, but most of Cyrodiil is a river-based society surrounded by jungle.

In-universe, the Pocket Guide to the Empire, 1st Edition was written around 2E 864, which is during the reign of Tiber Septim. Therefore, we can conclude that at least while he was Emperor during the end of the Second Era, Cyrodiil was a jungle. This is corroborated by other books as well.

Cyrodiil is the cradle of Human Imperial high culture on Tamriel. It is the largest region of the continent, and most is endless jungle. The Imperial City is in the heartland, the fertile Nibenay Valley. The densely populated central valley is surrounded by wild rain forests drained by great rivers into the swamps of Argonia and Topal Bay. The land rises gradually to the west and sharply to the north. Between its western coast and its central valley are deciduous forests and mangrove swamps.

While there isn't a date of authorship for this book, it's noteworthy that it appeared in a game before Oblivion.

After Oblivion, it was retconned to have been changed from jungle to temperate forest by Tiber Septim after the end of the Second Era

We of course see that Cyrodiil is temperate in Oblivion, set at the end of the Third Era. 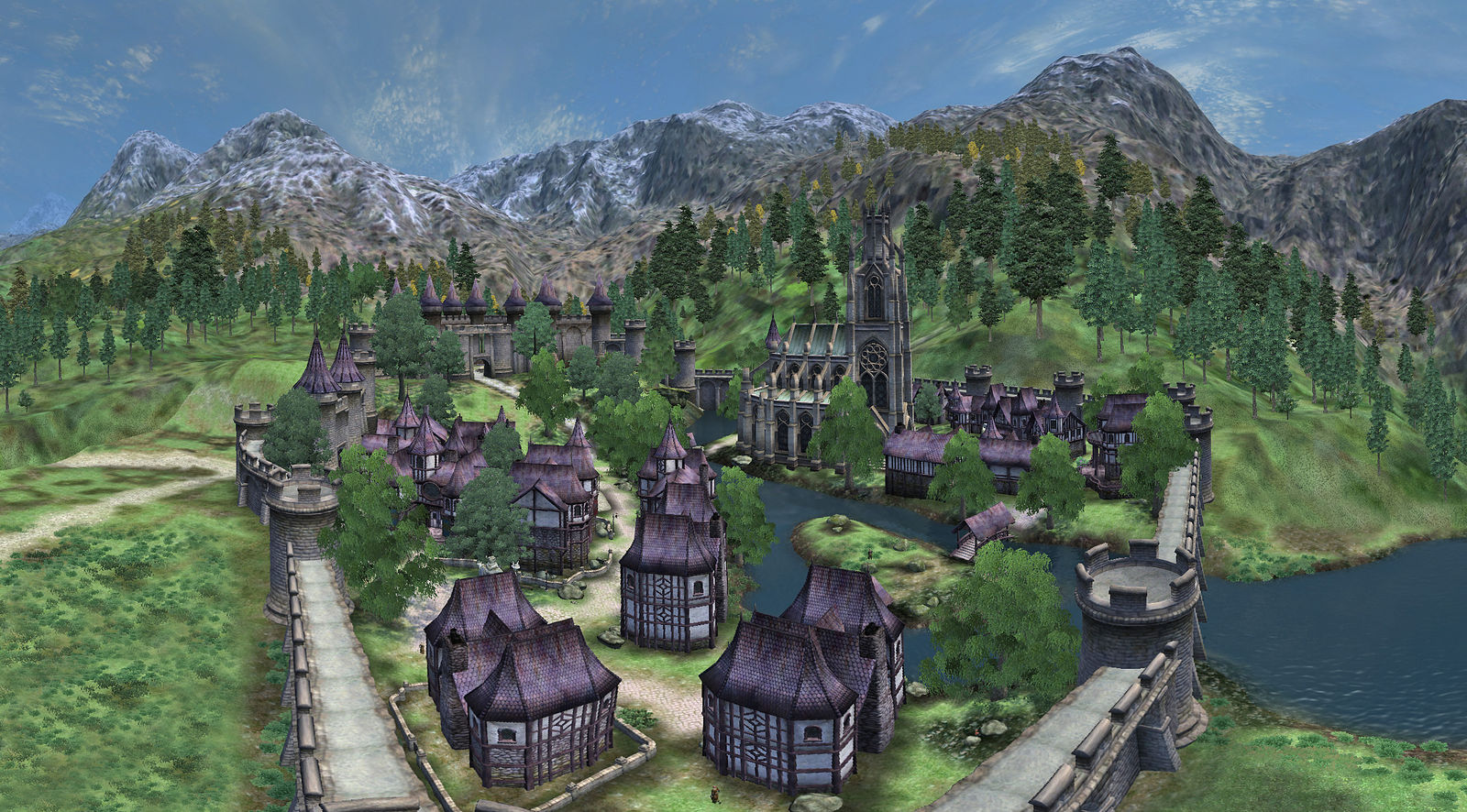 There is a single book that suggests that Talos (a.k.a. Tiber Septim) transformed Cyrodiil from a Jungle climate to a temperate climate. The "Red King" refers to Talos, and his home would be Cyrodiil.

CHIM. Those who know it can reshape the land. Witness the home of the Red King Once Jungled.

Additionally, Michael Kirkbride (writer for Redguard, Morrowind, and Oblivion) posted snippets from an in-universe book on the Bethesda forum in 2006 that more directly states that Tiber Septim changed the land from jungle to temperate forest.

"And after the throne of Alinor did finally break at the feet of Men, and news of it came to the Dragon Emperor in Cyrodiil, he gathered his captains and spoke to them, saying:

"'You have suffered for me to win this throne, and I see how you hate jungle. Let me show you the power of Talos Stormcrown [i.e. Tiber Septim], born of the North, where my breath is long winter. I breathe now, in royalty, and reshape this land which is mine. I do this for you, Red Legions, for I love you.'"

–The Many-Headed Talos, written by Michael Kirkbride and posted on the official Bethesda forum on June 27th, 2006

The latter part of Tiber Septim's speech (after mentioning Cyrodiil being a jungle) was reused for Heimskr in Skyrim.

The above statements are all contradicted by The Elder Scrolls Online, set in 2E 582 (nearly three-hundred years before Tiber Septim was born in 2E 828). As we can plainly see, it is a temperate region, and not a jungle as would be expected before Tiber Septim's alleged terraforming. 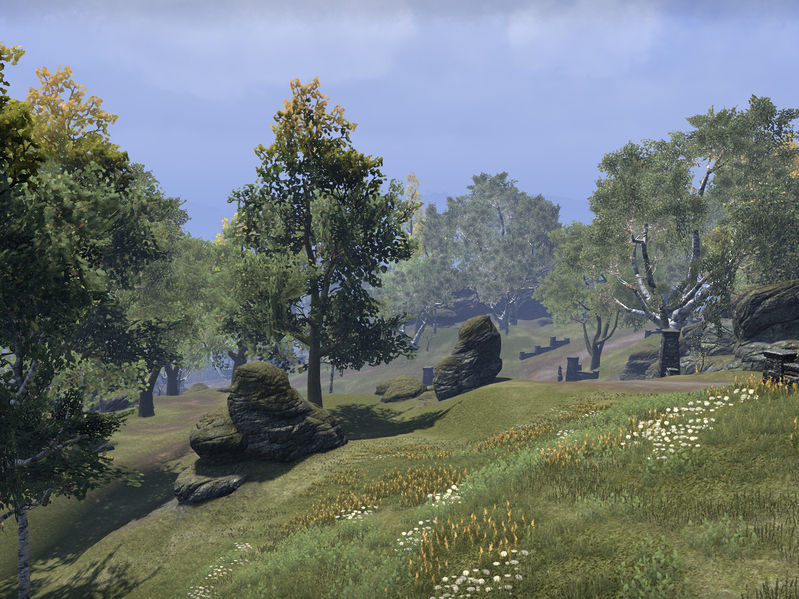 Therefore, Cyrodiil was originally a jungle before the Third Era from an out-of-universe perspective, but has been retconned to have always been temperate even before Tiber Septim's birth.

The explanation for this discrepancy is that "endless jungle" was a transcription error.

Much has been made of the classical author Heimskr's characterization of Cyrodiil as a jungle or rainforest. My studies indicate that the use of the phrase "endless jungle" to describe Cyrodiil appears to be an error in transcription. Close study of the original, badly faded manuscript reveals that the phrase was miscopied, and should be more accurately rendered as "extensive uplands." The adjectives "an equatorial rain" as applied to the Nibenese forest do not appear in the original manuscript at all, and I would posit were added by the scribe in support of his previous erroneous use of "jungle."

—The Heartland of Cyrodiil, first appearing in The Elder Scrolls Online

Additionally, there is a competing theory that Cyrodiil was indeed once a jungle in the distant past, but was magically transformed over time due to the presence of Men in Cyrodiil.

According to "The Heartland of Cyrodiil," by that old fraud Phrastus of Elinhir, the Nibenese valley and the Colovian hills have always enjoyed the temperate climate they have today, and early references to Cyrodiil as a subtropical jungle were merely errors on the part of one of the Heimskrs.

Really? What, then, of the "waving fronds" of Vahtacen mentioned in the Hosiric Lays? What of Khosey's "dense-jungl'd shore of Rumare" in the Tamrilean Tractates? Are these, as well, the mistakes of errant copyists?

No, I think it more likely that three millennia ago Cyrodiil's climate was warmer and wetter than it is today. The environment of the Heartland has changed. Which begs the question: how? […]

And that, I believe, is the answer to how the Heartland changed from subtropical to temperate: because once Men ruled in Cyrodiil, the local reality changed to meet their needs and wishes. Changed slowly, perhaps, almost imperceptibly, but inexorably—until Cyrodiil became the realm of temperate forests and fields we now know.

But any way you look at it, out-of-universe it's definitely a retcon

Both of these explanations fail to answer why Pocket Guide to the Empire, 1st Edition, written in 2E 864 (after The Elder Scrolls Online takes place), commissioned by Tiber Septim and written by the The Imperial Geographical Society, would make the mistake of saying that the Emperor's homeland was in fact a jungle. There is no in-universe explanation for this, and it's a pretty blatant retcon.

While it's possible that Tiber Septim somehow changed the past, there is no precedent for that happening in Tamriel (even with Dragon Breaks), and no suggestion that that was what was done.