Why is Mao's face on the money in Looper?

So in Looper we see a dystopian, future America which is clearly in the midst of a major recession. The paper money paid to the Loopers has Mao's face emblazoned on it and is printed in a typically Chinese shade of red, as shown in the image below.

Has anybody ever explained the reasoning behind this design decision?

From Abe's advice to Joe we know that China is a rising superpower in the Looper world. In addition, given the bankruptcy of the USA it is quite plausible that a foreign currency would be the trading medium of choice. However, I'd like to know if anybody connected with the making of the movie has made any official comment on this.

The in-universe reason was addressed in an article in the Hollywood Reporter. There's been a currency war and the US lost.

To lend Looper a futuristic feel – and project one possible outcome of the real-life currency valuation debate ongoing between Washington and Beijing -- DMG’s design department is mocking up a futuristic Chinese note that will used as money throughout the movie, DMG’s director of international business said. Asked whose likeness would feature on the new notes, L.A.-based Daniel Postaer said: “Mao, of course. There are some things you just don’t change.” 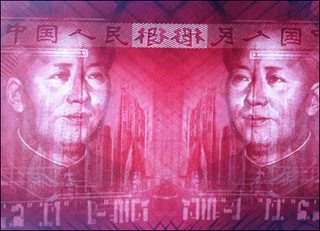 Not the answer you're looking for? Browse other questions tagged looper or ask your own question.

16
Why does a Looper have to kill his older self?
13
Doesn't the end of Looper create a time paradox?
7
Death of the younger version of a Looper
10
In Looper, how did things change the first time?
16
In Looper, why do they do this to Seth?
6
Is there really an infinite loop in Looper?
6
Looper: Origin of “Rainmaker” name
3
Looper - Why not send victims someplace to get cremated?