Are there any cemeteries in Westeros?

What do commoners and nobles do with the corpses in Westeros? Are there cemeteries or other places to put the dead?

There is one in Winterfell. Not the crypts for the Starks, but a graveyard for the commonfolk. Mikken, who died when Theon invaded Winterfell is mentioned being buried there:

Last of all, he donned his crown, a band of cold iron slim as a finger, set with heavy chunks of black diamond and nuggets of gold. It was misshapen and ugly, but there was no help for that. Mikken lay buried in the lichyard, and the new smith was capable of little more than nails and horseshoes. Theon consoled himself with the reminder that it was only a prince's crown. He would have something much finer when he was crowned king.
Theon V, a Clash of Kings - emphasis mine

This is seconded by Sansa, as she included it in her snowy version of the castle she has made during her time in the Eyrie:

The snow fell and the castle rose. Two walls ankle-high, the inner taller than the outer. Towers and turrets, keeps and stairs, a round kitchen, a square armory, the stables along the inside of the west wall. It was only a castle when she began, but before very long Sansa knew it was Winterfell. She found twigs and fallen branches beneath the snow and broke off the ends to make the trees for the godswood. For the gravestones in the lichyard she used bits of bark. Soon her gloves and her boots were crusty white, her hands were tingling, and her feet were soaked and cold, but she did not care. The castle was all that mattered. Some things were hard to remember, but most came back to her easily, as if she had been there only yesterday. The Library Tower, with the steep stonework stair twisting about its exterior. The gatehouse, two huge bulwarks, the arched gate between them, crenellations all along the top . . .
Sansa VII, a Storm of Swords - emphasis mine

Not only Winterfell has one. One is also mentioned by Sam in Castle Black:

The hour before dawn was dark and still. Castle Black seemed strangely hushed. At the lichyard, a pair of two-wheeled wayns awaited him, along with Black Jack Bulwer and a dozen seasoned rangers, tough as the garrons they rode. Kedge Whiteye cursed loudly when his one good eye spied Sam. "Don't mind him, Slayer," said Black Jack. "He lost a wager, said we'd need to drag you out squealing from beneath some bed."
Samwell I, a Feast for Crows

Brienne also finds a monastery with a certain gravedigger. You can't dig graves properly without a lichyard:

They passed a dozen brothers of the order on their way up; cowled men in dun-and-brown who gave them curious looks as they went by, but spoke no word of greeting. One was leading a pair of milk cows toward a low barn roofed in sod; another worked a butter churn. On the upper slopes they saw three boys driving sheep, and higher still they passed a lichyard where a brother bigger than Brienne was struggling to dig a grave. From the way he moved, it was plain to see that he was lame. As he flung a spadeful of the stony soil over one shoulder, some chanced to spatter against their feet. "Be more watchful there," chided Brother Narbert. "Septon Meribald might have gotten a mouthful of dirt." The gravedigger lowered his head. When Dog went to sniff him he dropped his spade and scratched his ear.
Brienne VI - A Feast for Crows

The North has barrows (burial mounds):

The rising sun sent fingers of light through the pale white mists of dawn. A wide plain spread out beneath them, bare and brown, its flatness here and there relieved by long, low hummocks. Ned pointed them out to his king. "The barrows of the First Men." Robert frowned. "Have we ridden onto a graveyard?" "There are barrows everywhere in the north, Your Grace," Ned told him. "This land is old."

A Game of Thrones - Eddard II

Winterfell has a crypt:

He was walking through the crypts beneath Winterfell, as he had walked a thousand times before. The Kings of Winter watched him pass with eyes of ice, and the direwolves at their feet turned their great stone heads and snarled. Last of all, he came to the tomb where his father slept, with Brandon and Lyanna beside him. "Promise me, Ned," Lyanna's statue whispered. She wore a garland of pale blue roses, and her eyes wept blood.

A Game of Thrones - Eddard XIII

There are graveyards in King's Landing:

Now the city covered the shore as far as Catelyn could see; manses and arbors and granaries, brick storehouses and timbered inns and merchant's stalls, taverns and graveyards and brothels, all piled one on another. She could hear the clamor of the fish market even at this distance.

A Game of Thrones - Catelyn IV

In Winterfell there is a crypt that the dead Stark Lords/Kings are put into.

They went down to the crypt together, Ned and this king he scarcely recognized. The winding stone steps were narrow. Ned went first with the lantern. "I was starting to think we would never reach Winterfell," Robert complained as they descended. "In the south, the way they talk about my Seven Kingdoms, a man forgets that your part is as big as the other six combined."
...
He led the way between the pillars and Robert followed wordlessly, shivering in the subterranean chill. It was always cold down here. Their footsteps rang off the stones and echoed in the vault overhead as they walked among the dead of House Stark. The Lords of Winterfell watched them pass. Their likenesses were carved into the stones that sealed the tombs. In long rows they sat, blind eyes staring out into eternal darkness, while great stone direwolves curled round their feet. The shifting shadows made the stone figures seem to stir as the living passed by.
A Game of Thrones, Eddard I

We see this in the TV series too: 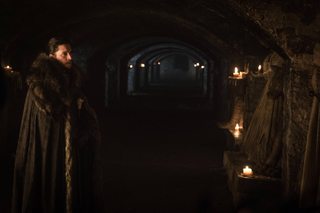 Beyond the Wall the wildlings burn their dead and as we see later on in the series the Northerners take on this tradition too.

When he brought the skull to Mormont, the Old Bear lifted it in both hands and stared into the empty sockets. "The wildlings burn their dead. We've always known that. Now I wished I'd asked them why, when there were still a few around to ask."
A Clash of Kings, Jon II

The North also has lots of graveyards/burrows in it as commented on by Ned.

The rising sun sent fingers of light through the pale white mists of dawn. A wide plain spread out beneath them, bare and brown, its flatness here and there relieved by long, low hummocks. Ned pointed them out to his king. "The barrows of the First Men."
Robert frowned. "Have we ridden onto a graveyard?"
"There are barrows everywhere in the north, Your Grace," Ned told him. "This land is old."
A Game of Thrones, Eddard II

It's also worth noting that this must be common around Westeros, but more common in the North, as Catelyn has the follwoing thought.

"Then you had best retreat back to Moat Cailin, deploy to meet Lord Tywin in battle … or grow wings. I see no other choices." Catelyn put her heels to her horse and rode off, leaving her son to ponder her words. It would not do to make him feel as if his mother were usurping his place. Did you teach him wisdom as well as valor, Ned? she wondered. Did you teach him how to kneel? The graveyards of the Seven Kingdoms were full of brave men who had never learned that lesson.
A Game of Thrones, Catelyn IX

Lastly, in the show Sandor Clegane finds a cottage of two people that have died in the cold of winter who once helped him. He digs them a grave late at night so this is likely common amongst commoners. 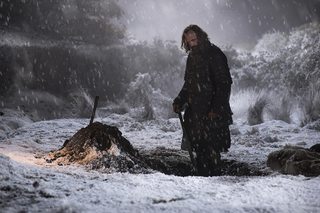 28
In A Song of Ice and Fire, do the bastards of commoners also get "natural" surnames?
8
Has Essos ever invaded or attacked Westeros?
6
Is there any mention of mathematicians in Westeros?
23
What exists beyond Westeros, North of the Wall and the Free Cities?
8
How many known volcanoes are there in Westeros?
5
Are there any proper industries in Westeros and Essos?
7
Are there any recreational drugs in Westeros or Essos?
16
Can White Walkers reanimate the dead in cemeteries?