Can warp drive be used to travel at sublight speeds?

The answer and discussion around this question

make me wonder about the following:

Warp drive works by warping space so that the ship need not "travel faster than light (within its bubble)" to still travel objectively faster than light would take. And this is necessary because infinite energy would be needed to approach the speed of light according to (both real-world and Star-Trek) relativistic physics.

So, is it possible to engage a warp field and use it to get the energy savings without actually exceeding the speed of light objectively?

Can I use my warp to get from the Earth to the Sun in 16 minutes rather than the 8 taken by light? Has it been demonstrated? If not, is it not possible or it is simply more efficient (for [handwave] reason) to use half-impulse?

Yes, and it's been done

First, a look at the warp scale: 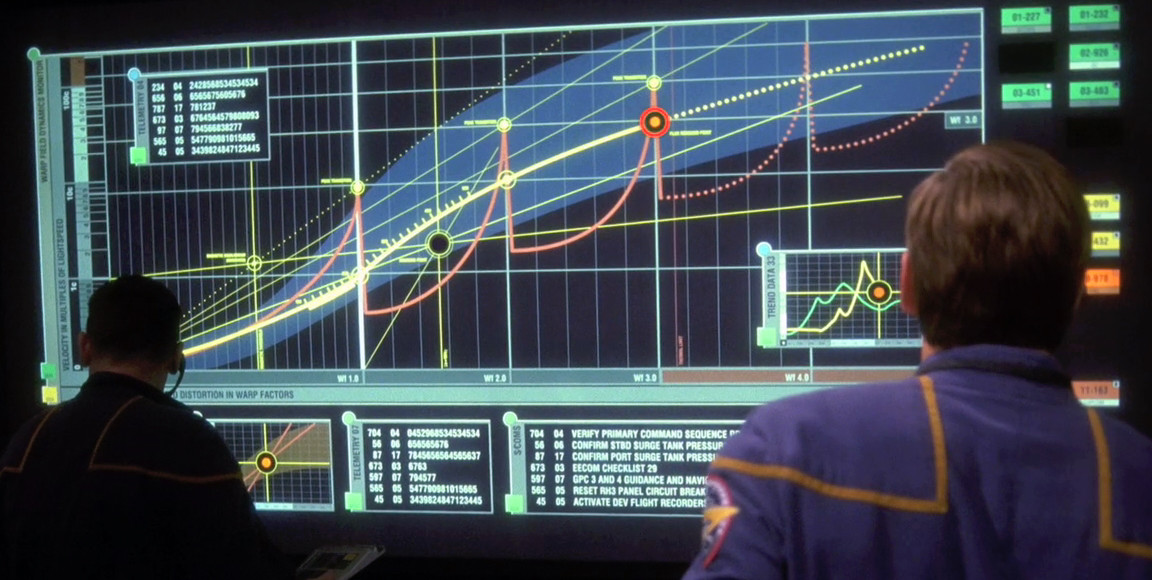 Notice that the plotting doesn't begin at warp one, but rather at 0. This would at least in theory strongly imply the existence of warp factors less than 1, which per the chart map to sublight speeds.

But we actually have an example of this. According to the Warp Factor page on Memory Alpha, Star Trek: The Motion Picture contains an instance of 0.5 warp. This led to a 1.8 hour trip from Earth to Jupiter, when light itself would normally take only around 35 minutes.

So yes, you can warp at speeds slower than light. This is especially useful since impulse usually doesn't get you up to light speed (because acceleration is weird in the Star Trek universe). This can be seen in that Voyager's impulse engines could only get up to 1/4 light speed.

I don't know if there are examples of using warp drive to go slower than light. The example given from Star Trek: The Motion Picture might be an error.

After flying though space and passing Jupiter:

Captain's log, stardate 7412.6. one point eight hours from launch. In order to intercept the intruder at the earliest possible time, we must now risk engaging warp drive while still within the solar system.

KIRK: Mister Decker... Wormhole! ...Get us back on impulse power! Full reverse!

So Kirk tells Sulu to use impulse power to go ahead warp point five.

This can be interpreted two ways.

1) Kirk is telling Sulu to use the impulse ENGINES to travel at the speed equal to warp factor point five.

2) Kirk is telling Sulu to use the impulse REACTOR to POWER - provide energy to - the WARP ENGINES so that the Enterprise will travel on WARP DRIVE at the speed of warp factor point five. In this interpretation the Enterprise does use warp drive to travel slower than light.

When Kirk says that they must risk engaging ("turning on and using") the warp drive on stardate 7412.6, that seems like a very strong indication that interpretation number one is correct and that the impulse engines were used to achieve warp factor point five.

SCOTT (on intercom): We need further warp simulation on the flow sensors.

McCOY: Jim, you're pushing. Your people know their jobs.

ASSISTANT ENGINEER: That's it, sir. I can't do any better.

SCOTT: Aye, lad. It's borderline on the simulator. Captain, I canna guarantee that she'll hold up.

Clearly the Enterprise is about to do something new that hasn't been done since the rebuilding started. It seems very probable that the warp engines have not been used until now, and that the Enterprise used the impulse engines to travel at warp factor point five.