Did the “Lying Bastard” create the Fist of God?

No. The mountain was there long before Louis Wu had discovered the Ringworld.

Fortunately for the residents of the Ringworld, because if it didn't, the air would have bled from the Ringworld slowly and steadily until it was unable to maintain a regular atmosphere.

Quote from Ringworld where Louis Wu visualizes the formation of Fist of God:

He saw the, system of the Ringworld, sterile, tidily clean, empty of ramships, empty but for a G2 star and a daisy chain of shadow squares and the Ringworld.

He saw a foreign body passing near, too near. He watched its hyperbolic fall from interstellar space, and he saw its path interrupted—by the underside of the Ringworld. In his vision the foreign body was about the size of the Earth's Moon.

It must have been ionized plasma in the first seconds. A meteorite can be cooled by ablation, by the boiling away of its own skin. But here the vaporized gas could not expand; it had forced its way into a deforming pocket of the Ringworld floor. The landscape had deformed upward, its carefully planned ecology and rainfall patterns shot to hell over a region greater than the surface of the Earth. All that desert ... and Fist-of-God itself, raised a full thousand miles upward before the incredibly tough Ring floor ripped to let the fireball through.

Fist-Of-God? Tanj, yes! Watching from a Ringworld prison cell, Louis Wu had seen it clear in his mind's eye. It must have been visible clear to both rims: a ball of hellfire the size of the Earth's Moon ripping up through the floor of the Ringworld like a strong man's fist through a cardboard box.

The natives could be thankful that the Ring floor had deformed as much as it did. The hole was easily big enough to let all the air out of the Ringworld; but it was a thousand miles too high ... 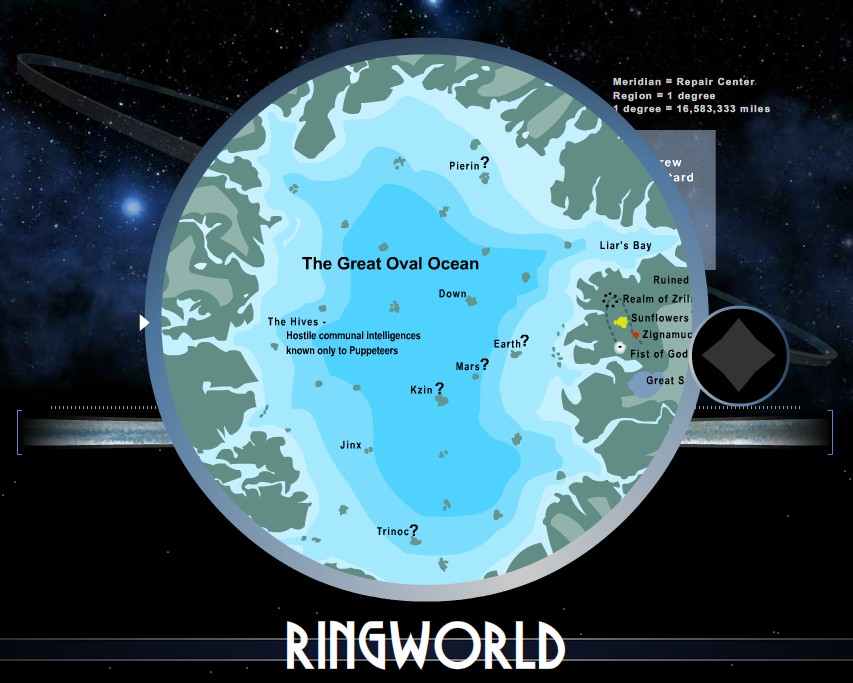 In The Ringworld Throne, Niven gives us a little more detail on the Fist-of-God event-

The Vampire Protectors Bram and Whisper knew that the impact would draw the Ghoul Protector Cronus to the Repair Center, setting the stage for an ambush. Louis Wu tells Bram "You let Fist-of-God hit the Ringworld!"... pg 336 Del Rey Mass Market Paperback edition

The Hive-Intelligence race is mentioned in The Ringworld Engineers, in a throw-away comment from the Hindmost. They don't appear in any of the stories so far.

Not the answer you're looking for? Browse other questions tagged larry-niven ringworld or ask your own question.

71
Book in which the “mountain” in the distance was a hole in the flat world
21
How would one navigate on Larry Niven's “Ringworld”?

22
How much did Larry Niven's Ringworld inspire the Halo game franchise?
9
Where did the escapees from Ringworld end up?
4
What did Peace Corben do to the Puppeteers?
8
Why did the Ringworld Engineers use flatten map as a way of forming maps of worlds?
25
How to get sunburned through the window of a General Products hull?
16
How did Louis guess the major reveal in Ringworld?
2
Why couldn't Teela Brown make the same calculation that Louis Wu and Chmeee did?