What was the first instance of a fighter spacecraft

While spaceships of varying size and technology have long been a fixture of sci-fi, fighter sized spacecraft used for combat seem to have only appeared in the late 70s. Since fighter planes have been shooting each other out of the sky since the early part of the twentieth century, I find it odd to think that the first example I can find of a space-faring version is in Star Wars - rapidly followed by Battlestar Galactica and Buck Rogers*.

What is the earliest example of a starfighter in the annals of science fiction?

By starfighter, I specifically mean a one or two person space vehicle, designed for combat, with high manoeuvrability (realistic physics notwithstanding).

*I am aware of the Buck Rogers comics, but try as I might, I can't find a reference to starfighters in them. If anyone can correct that misapprehension, I'd appreciate it.

1930: The Black Star Passes, a novella by John W. Campbell, Jr. in his Arcot, Morey and Wade series, first published in Amazing Stories Quarterly, Fall 1930, available at the Internet Archive. (The Project Gutenberg etext of The Black Star Passes is useless for our purposes, as it was transcribed from the 1965 Ace edition, which is not identical with the original 1930 magazine story.)

The Terrestrial scientists are preparing to do battle with the invaders from the Black Star:

"The ships must be capable of about six or seven thousand miles a second, and that implies all the acceleration a human being can endure. Since I expect to make long trips in them, I think we will do best if we make several types of ships. Three should suffice: a small single man cruiser, with no bunk or living quarters, just a little power plant and weapon. One that can jump out of the way of a ray so quickly that it will be very hard to hit, and at the same time, because of its ray, be very dangerous. There will have to be some place for the operator of this ship to sleep and eat. I think the easiest way to solve that is to have a large fleet of mother ships — ships with a twenty-man crew, but still very active, and very deadly. These should have bunks and living quarters for the crew. Some men would be sleeping in the bunks all the time. The men could take turns running the one-man ships and sleeping. There will also be some ten-man scout cruisers. These will be used in the same way, but will have a smaller fleet of ships dependent on them.

Each of the little ships, the one-man machines, was equipped with a small machine-gun shooting luminous paint bullets. One of these bullets, landing on a machine, made it visible for at least two hours, and as they would cover an area of perhaps thirty square feet, they were decidedly effective.

The aliens have their own mother-ships and fighters:

And thus that great courtyard had been filled with Giants of Space! And in each of these thousand great warships there nestled three thousand tiny one-man ships. A thousand five hundred miles the great metal bulks alone would stretch, and with them would go a great swarm of tiny stinging ships, like some horde of stinging wasps swarming about their nest.

I can find a few references for Flash Gordon and Buck Rogers with space ships having lasers/guns or similar and attacking each other, unfortunately I can't tell exactly when they were published:

One of the original comics from mid 1929 for Buck Rogers depicts a two man, enclosed fighter craft, however it's a little unclear if this is in space or atmosphere (most likely atmosphere):

There is a depiction of plans to build a space faring fighter, but the last panel, and subsequent strips make it bigger than the small fighter, but much smaller than a true "starship", maybe 10ish people.

(All Buck Rogers strips sourced from an archive: https://web.archive.org/web/20100625022756/http://rolandanderson.se:80/comics/buckrogers/buckstrips.php 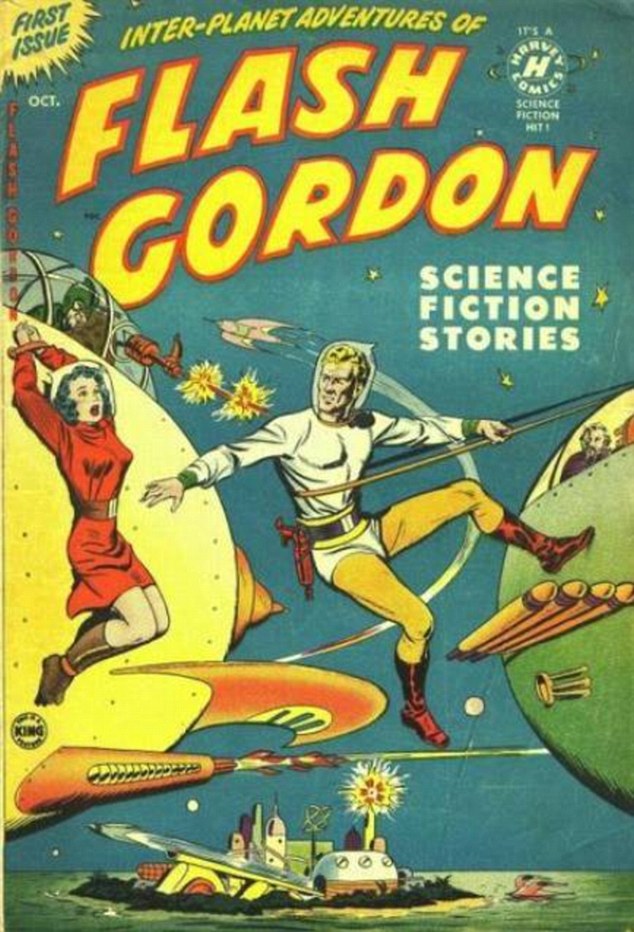 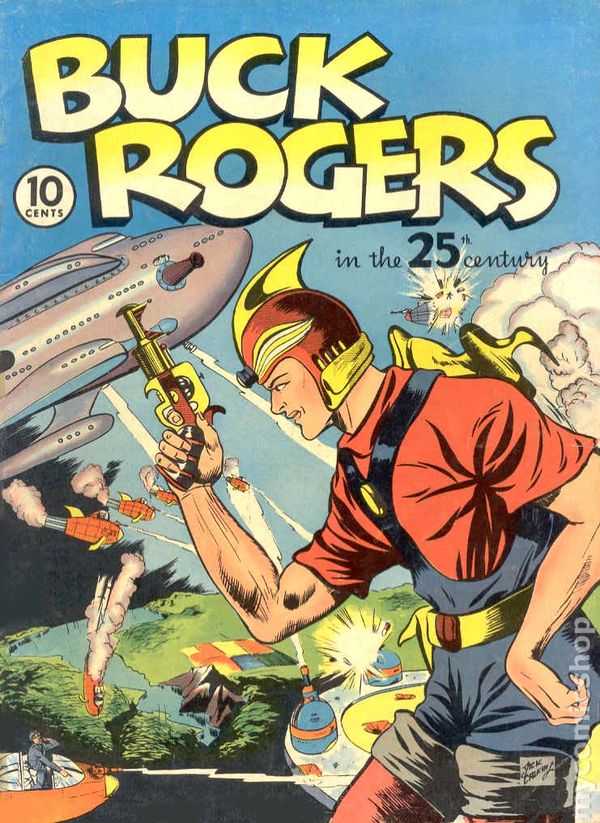 There is also this article talking about early space operas, I haven't found an image from any of the early movies, but I remember some badly dubbed lasers in some B&W movies from the 50's.

Flash Gordon Conquers the Universe episode one (1940, starting about 4:30 in):

Since as of yet there seems no earlier answer that precisely matches, the first bit of Science Fiction I ever read where old issues of the German "Perry Rhodan" series, and they had fighter spacecraft (basically described as a large canon strapped to a large engine, with not much space for the single pilot) in 1961 (Issue #9, "Hilfe für die Erde").

And if I recall correctly Perry Rhodans "predecessor" series, K.H. Scheer's ZBV series, had fighter spacecraft in the 50s (I don't have exact publishing dates. Scheer went on to become one of the founders of "Perry Rhodan").

In neither series the concept of space fightercraft seemed particularly novel at the time.

I'm not sure if it fits the idea of "starfighter" that you have in mind, but in the 1973 novel Protector, Larry Niven described space combat between ships designed for and crewed by single pilots.

Because of his realistic writing style and there not being any faster-than-light travel in the novel, the single-pilot craft are larger than what we might think of as a "starfighter" in the Star Wars sense, since there has to be minimal living quarters and life support systems for the single crewman to live on them for years at a time.

Not the answer you're looking for? Browse other questions tagged history-of spaceship space or ask your own question.