Looking for a book: Magic after the end of technology, with horrifying remnants of technology like large monsters [duplicate]

I read a book as a kid about a world some 1000 years from now (I think), in which there is all sorts of magic. I think the book follows a kid who travels between towns with a mentor discovering the magic. At some point in their journey they pass through a decrepit city with ancient monsters in it that were created by technology; they fight a massive monster that I remember being described as having too many arms and being furry and as tall as the buildings. Other identifying things about this story are that at some point later in the book they go into the land of the angels/sirens/something like that, and have to go through without opening their eyes or something, to get to their destination.

I think of this monster scene often in my aesthetic thinking about how to design worlds, and I really want to find it again and see what it was I remembered and liked so much about it.

This looks like The Sword of Shannara. There is a scene in a destroyed city, with a - if I remember correctly - a mutated giant spider-centipede with pieces of armor embedded in its flesh; and also when the heroes' party goes through the Crypt of Treasures with Allanon the Druid, they have to concentrate on him to avoid being lost to the hypnotic voices of the guardian statues.

This is the passage with the battle with the monster, from Google Books: 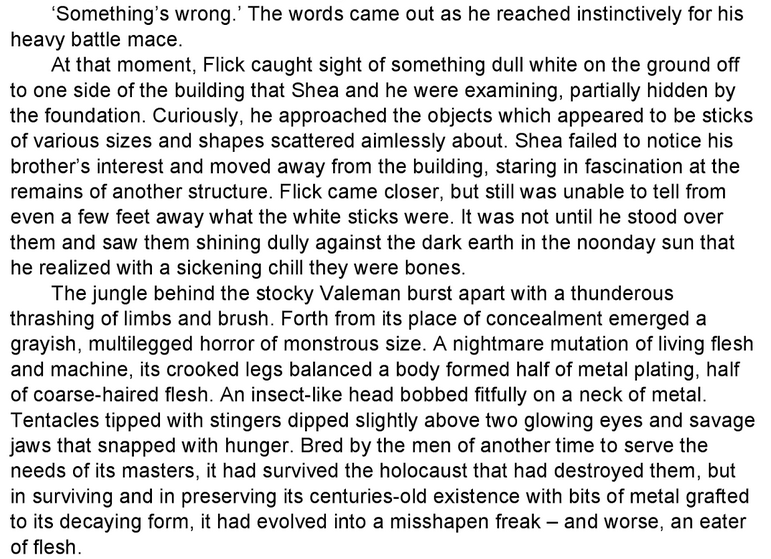 This is the passage where Allanon the Druid warns the party about what is to come:

"Soon after we enter, we will reach the tunnel of the Sphinxes, giant statues like these sentries, but carved as half man, half beast. If you look into their eyes, you will be turned to stone instantly. So you must be blindfolded. In addition you will be roped to one another. You must concentrate on me, think only of me, for their will, their mental command, is strong enough to force you to tear off the blindfolds and gaze into their eyes."

It is likely not this one, but I thought I would throw it in anyways because it is the first thing I thought of when reading the question.

This book starts as a typical fantasy novel with some strange magic. There are instances of Technology in the world, but magic is predominant. It is not initially explained what happened and the main characters only know of myths and legends which are not very informative.

By the end of the book, we find out what happened. It turns out that the reason for the fall of technology was a large supercomputer named ARDNEH. It was a nuclear fail-safe which was supposed to activate in the case of a nuclear attack to protect everyone. It did so by invoking a "change" which we are led to believe manipulated the laws of physics in such a way as to negate nuclear fusion bombs. When WWIII happened, ARDNEH activated "the change". The unexpected result was that it also opened the door to magic and made some technology no longer viable due to the new physical laws.

The characters do come across a large furry beast, but don't have to fight it. It is actually an evolved dog and is named Draffut who had gained powers and intelligence from a magical healing pond (originally some technological feat as well). They do, however, have to fight demons. One demon, Orcus, was the result of a nuclear blast going off at the exact time of "the change". The blast froze mid explosion and became pure power, that (like Draffut) gained sentience over time and turned into a powerful malevolent being. Likewise, ARDNEH became sentient as well and was able to keep itself running though the years.

At the climax of the book, ARDNEH is under attack by Orcus and just when it is about to destroy ARDNEH, "the change" is reversed. This causes Orcus to finally complete his nuclear explosion, killing him and ARDNEH in the process. However, there is still magic in the world after and there is a subsequent book, ARDNEH's Sword, which leads into Saberhagen's Swords series.

Not the answer you're looking for? Browse other questions tagged story-identification magic post-apocalyptic or ask your own question.

8
Fantasy book that turns out to be post-apocalypse, set several millennia after a nuclear war