Does Tempest have a Cutie Mark?

is never shown with a cutie mark. As an adult she is always wearing her suit of armor, and as a filly in a flashback she doesn't appear to (yet) have a cutie mark.

Does Tempest have a cutie mark?

One might imagine that it has something to do with

berries or soft drinks (as suggested by her "real" name)

but there's no proof that that is so. It seems plausible that she may never have had a cutie mark to begin with if she began her villain journey before gaining one. Other pony villains (Nightmare Moon/Luna, Sunset Shimmer, Starlight Glimmer) were seen in the show or a film with cutie marks.

So far, no official material seems to include a depiction of her cutie mark. Obviously, this doesn't mean she doesn't have one, but up to season 7 ending we have no real proof suggesting either answer.

Please also consider that Tempest Shadow character has undergone multiple changes - to the point that some source claims she originally was Cosmo, Celestia's brother from the original movie plots leaks. So, it would be perfectly plausible that they haven't yet come up with a defined decision on how to use her character: as far as we know now, S8 may include and episode with the CMC helping her finding out her true purpose (yay! continuity!).

Also consider that comic writers for a long period had a sort of "embargo" on drawing Star Swirl cutiemark... only recently he got the official one that he is portrayed with in the season 7 finale, so... it is also plausible that they have already planned out an answer but are holding back on it.

Conclusion is: as now, there is no official statement I know of that would provide an answer to this question. Maybe others may be more lucky or skille in goggle-jitsu arts and find out some intricate references a staff member gave out during an interview or something, but I couldn't find any.

A little update. I recently had the idea to check if Tempest is shown having a Cutie Mark in any of her later appearances in the show/comics (see here for example, link to the Tempest Shadow gallery on the MLP wiki) but apparently she is always drawn with some dress or armor that covers said Mark.

That said, something catch my eye. 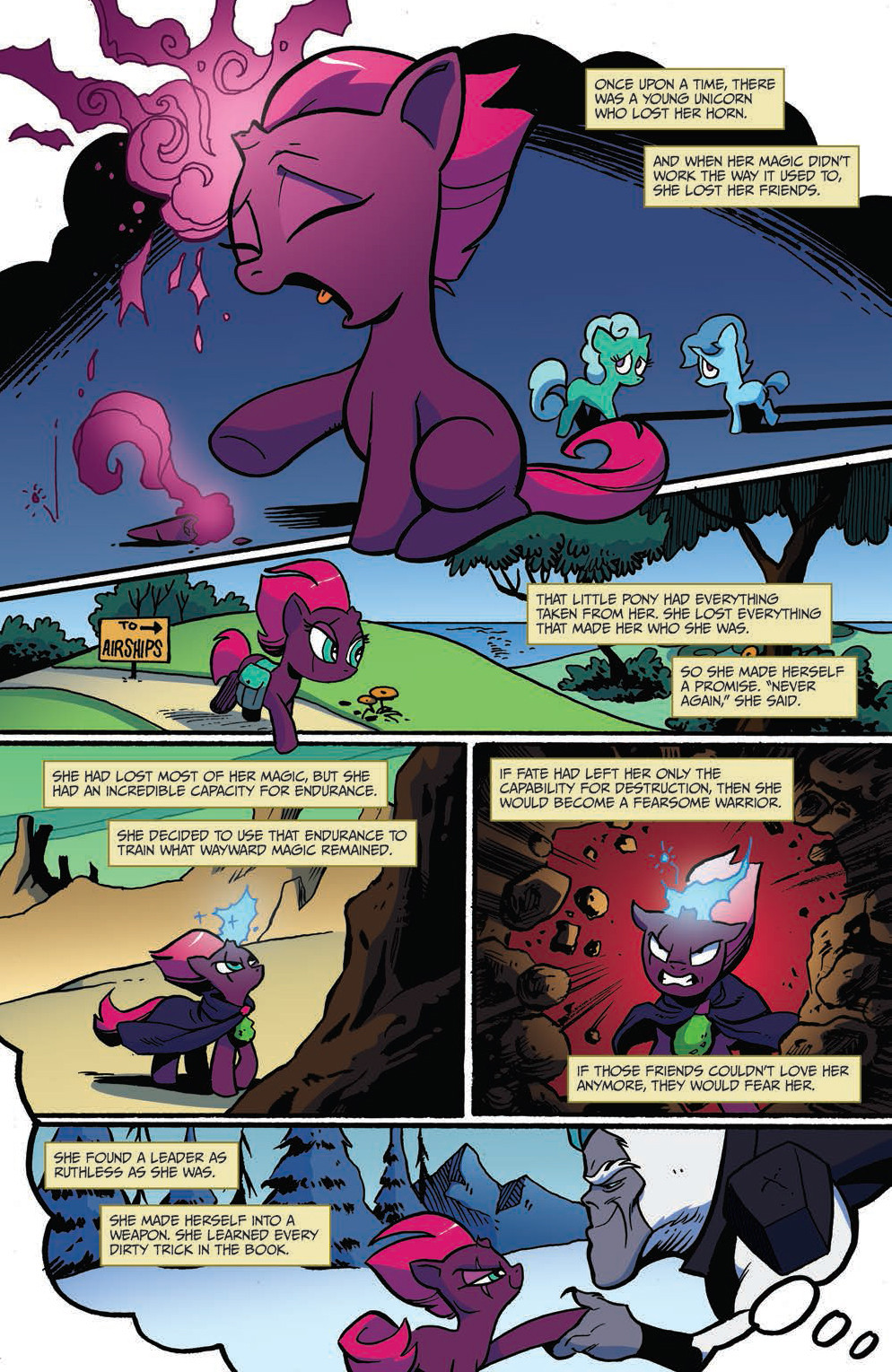 If we take this picture from the IDW comic issue #68 preview as canon, what Robert theorized in his question doesn't seem too farfetched. Tempest Shadow could still be a "blank side", without a Cutie Mark, because in her early life she never found what makes her happy. Sadly as far as I know there is nothing in the comic that could confirm this, but at least is seems that this interpretation is backed by some elements in the story. That could also explain why she always covers her side even after leaving the Storm King army - if you trust what the Cutie Mark Crusaders said in the past, "Blank Side" ponies are often the target of jokes and derision, so maybe she is trying to hide that.

11
Why do the Cutie Mark Crusaders live with their sisters instead of their parents?
10
What kind of authority does Rainbow Dash have?
17
What does Derpy's cutie mark mean?
5
Who are the two yellow mares in the season 5 poster?
4
Does Sunset Shimmer have a human equivalent?
2
Does Scootaloo have biological parents or is she adopted?
9
Who is the green bearded painter unicorn in S6 E4 “On Your Marks”?
5
What is Zephyr Breeze's special talent according to his Cutie Mark?
4
Does Equestria have elections?
2
What pony has this sun and hearts cutie mark?