I checked out a book from an Upstate New York library sometime in the early to mid 2000s and haven't been able to find it since. I remember the title as "____'s War," where the ____ was the main character's last name, which stated with a D. I think the name was Dextra or something similar, but I haven't found anything by searching that.

The main character was an old man who invented some sort of FTL drive. Early on in the book he impresses a student by solving some complicated equation in his head relating to his FTL method. During one of the test flights of the FTL ship, the ship is attacked by aliens that look like spiders, and in every encounter they retreat after taking exactly 50% casualties.

At one point an alien weapon is brought to Earth and the main character gets to examine it. It is a laser weapon of some kind, with a beam that can be varied in length and intensity. He uses it to carve himself a really fancy walking stick.

At the end of the book, a large alien fleet attacks Earth while the human fleet is out of position. The human fleet pulls off a tricky gravity slingshot maneuver to get back in time and manages to inflict the 50% casualties needed to force the aliens back. One ship ignores the retreat and sacrifices itself to land a bomb on Earth. The last scene is the main character preparing to give a speech near the crater left by the bomb. 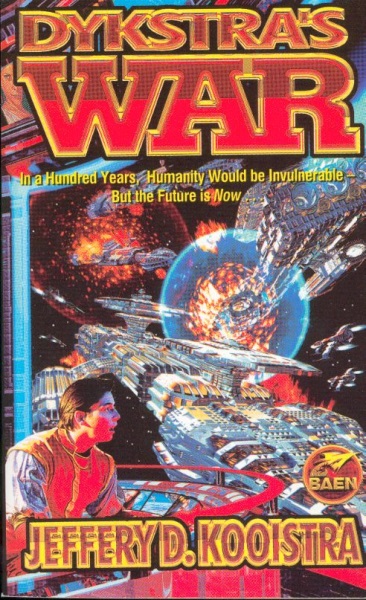 Dykstra's War, a 2000 novel by Jeffrey D. Kooistra; a fix-up of the novelette "Sunshine, Genius, and Rust", the novella "Young Again", and the short story "Last Exit Before the Final Frontier", originally published in Analog Science Fiction and Fact.

I don't have the book; the excerpts below are from the novella "Young Again" in Analog Science Fiction and Fact, December 1993.

The main character was an old man

"Well, Professor Dykstra, I recommend that you try using a cane."

"A cane?" the old man said. "The dawn of the 22nd century, and the best that medicine can offer me is a cane?" He said it not with bitterness, or distress, but only ironic amusement.

"I'm sorry, Professor, but you are 126 years old. There's a limit to what we can do with muscle and nerve past the century mark," the doctor said.

who invented some sort of FTL drive.

He recalled his meeting with Paul McAndrew, the first protestant saint. The man had shaken his hand, then looked at him funny, and said, "You are James Christian Dykstra, and through you God will give Man the stars." The memory still sent shivers through him.

The prophecy had come through, after a fashion. Dykstra field physics had made possible so many dreams of science fiction. Force shields, artificial gravity, repulsor beams, cheap fusion—all of these had resulted from his genius. With his inventions had come new weapons, weapons that the Belt was now using against the Solar Union. He felt bad about that. But humans will be humans.

Later, he figures out the alien FTL drive:

Early on in the book he impresses a student by solving some complicated equation in his head relating to his FTL method.

Dykstra read the problem, then looked away, letting his mind work, seeing if he still had it in him to solve such problems. He had it. "From the symmetry of the situation, what you should do is consider the projection of the 4-space field, its 3-space shadow if you will. Then integrate from zero to pi. The answer is 45.2 joules per meter to the fourth." He smiled, eyes twinkling.

The boy stared at him, his face jumping from pure disbelief to respect bordering on awe. "That's the answer in the back! How did you know?"

At one point an alien weapon is brought to Earth and the main character gets to examine it.

"The device is a weapon of extraterrestrial manufacture. That's right, we've encountered aliens. That fact is not for public consumption. You know what that means. The story of how we came into possession of the device is also in the cube.

It is a laser weapon of some kind, with a beam that can be varied in length and intensity.

"Intelligence has been able to find out how to work the weapon, but not how it works. We know how to fire it, how to adjust the length of the beam, and how to adjust the beam intensity. We also know that the beam itself is an X-ray laser. But how the beam is generated is beyond us. The weapon uses Dykstra fields in a way we've never seen before.

He uses it to carve himself a really fancy walking stick.

The twinkle still in his eyes, he turned off the beam, then reached down for his creation. It was warm to the touch, but not too hot to hold. It left black marks on his palms, but he didn't care. "I'll have to clean you off, and sand you a bit, and give you a coat of wax," he said to the stick.

But carved from a living oak with an alien weapon—the world's first alien weapon—and shaped by his own hands. . . . Now there was a walking stick with character.

During one of the test flights of the FTL ship,

There are no FTL tests in the stories I read, namely, the novelette "Sunshine, Genius, and Rust" and the novella "Young Again". The latter ends with Dykstra having figured out how the alien FTL drive works and promising to duplicate it:

Dykstra laughed. "Your reasonable attitude delights me, Major. I will continue to work for The Phinon Project. And I will give us a faster-than-light drive."

the ship is attacked by aliens that look like spiders,

First contact occurs when one of our slower-than-light spaceships is attacked and boarded by aliens. Dr. Dykstra interviews the pilot:

"But how did you feel when you first encountered the aliens. I mean, what was your impression of them, apart from the situation?

"I happen to be one of those people who can't abide spiders. Ants, beetles, other bugs don't bother me," Michaels said. "But spiders . . . I think Satan himself invented spiders."
[. . .]
Michaels continued. "After the aliens blasted their way in, I got a good look at them when they came into the corridor. The backwards bending elbows and knees were funky enough, but what struck me wasn't the way they looked. It was that I felt like I was up against big spiders, things that were so utterly different. . . ." He trailed off.
[. . .]
"But the aliens were like spiders—who can empathize with a spider? They walked on two feet, they had technology, they flew spaceships. But as they stalked my ship, when I was killing that one, even when the other one ran away like a bat out of hell, it just didn't feel like humans have anything in common with them at all.

and in every encounter they retreat after taking exactly 50% casualties.

There are two instances of that behavior in the stories I read. First, when Michaels killed one of the two aliens that boarded his ship, "the other one ran away like a bat out of hell." Second, when the aliens attack the System Patrol base code-named Slingshot:

Details were sketch, and more information was promised for later, but the base had been hit by two alien spacecraft. They'd come in fast, without warning, and opened fire. The base had taken a beating, but somehow they'd managed to wreck one of the alien ships, and the other had immediately raced away.

16
Help Identifying a Sci-Fi Book: Humans transported to alien world and given tasks to escape
13
identify this book about a human turned into a god by aliens
6
What is the title of this book about aliens deep down in a mine?
8
Book about an attempted alien invasion
6
Book about a tongueless teenager who might be an alien