If they are related, then what is his relation to Scott Summers and how does this explain the age gaps between Scott and Professor X?

He is Scott Summers' younger brother in the comics, adopted out at a young age after the plane crash killed their parents. However in X-Men: First Class he was conceived as an independant character.

When questioned of Havok & Cyclops' "brother" relation, “Yes, the time line is different,” Singer said. “It wouldn’t physically fit for him to be the brother of Cyclops. We take some liberties on that.”

Bryan Singer, producer of the movie, interviewed at http://www.comicbookmovie.com/fansites/MarvelFreshman/news/?a=29870

Obviously the age difference betwen him, Professor X and Cyclops doesn't matter in that case - Havok's age is independent of Cyclops'.

The original x-men-cinematic-universe backstory for Alex apparently included a foster sister, as Lucas Till mentioned in this interview with IGN, but this was all cut from the final theatrical cut of the film.

While Bryan Singer previously said that Scott and Alex were not brothers, he apparently changed his mind on this fact.

During the production of X-Men: Apocalypse, he posted this photo: 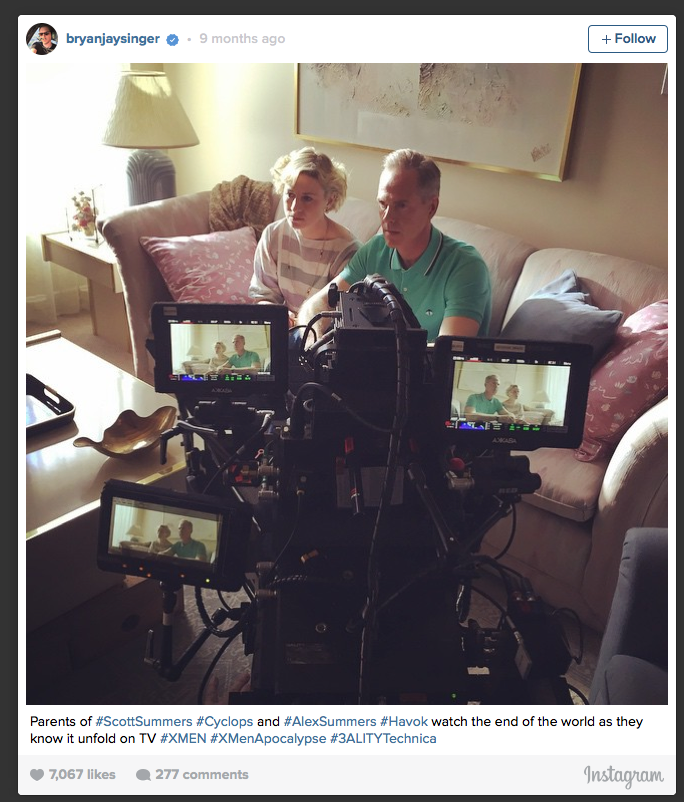 In the final cut of X-Men: Apocalypse, multiple mentions of Scott and Alex being brothers are made, including Alex specifically introducing Scott as his brother.

While possible that they are not related by blood, the Summers share the same parents, making them brothers.

They are brothers in the original comics with Alex being the older brother, in X-Men:First Class, Alex was with Xavier before Xavier found Scott. At the end of X-Men: Origins: Wolverine when the Professor is waiting in a wheelchair after Logan frees the mutants from the island. Because Wolverine happened not so soon after First Class. So Alex met Xavier first, making him the older brother in the timeline between First Class and Wolverine.

exclude the comic fact, considering the timeline, alex summers might be scott summer's uncle or father

Sure it's possible first class took place before wolverine had his movie . On witch cyclops was a kid at least 10 or 12

Not the answer you're looking for? Browse other questions tagged marvel x-men x-men-cinematic-universe x-men-first-class or ask your own question.

7
Why was Alex Summers in prison?
15
Was Xavier's surprise at Magneto's helmet ever retconned?