Were both of Howl's city exits within the same country?

The first few times I watched Howl's Moving Castle and even when I read about the story on Wikipedia it's not totally clear where the two major city exits, Porthaven and the capital Kingsbury, are in the fictional universe. At first I assumed those exits were each in the two different warring counties, because that would be ironic given each nations' militant nationalism, pacifism being one of the movie's themes. This was compounded by the fact that when soldiers come to arrest Howl they appear to be wearing different uniforms.

But later in the dialogue Howl says that he has received a summons as both wizard personas to the 'palace', singular. The Wikipedia entry for the story suggests that the entrances were in two different cities within the same country. Perhaps, one group of soldiers were Porthaven marines and the other group were regular army soldiers at the capital.

Were both of Howl's city exits within the same country? 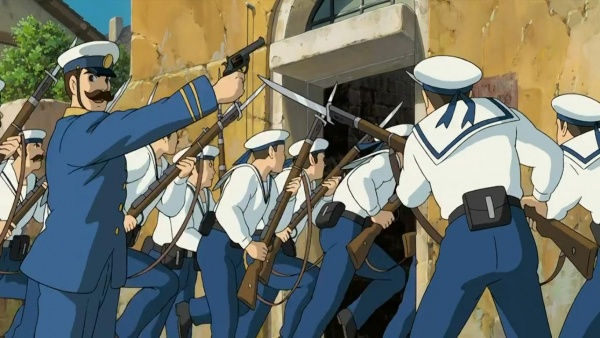 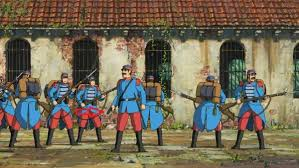 Yes, the portals are definitely in the same country, Porthaven and Kingsbury.

This webpage tells where the portals lead: "Howl's Castle", Wikia. It says before the movie, the doors go to

and by the end they go to

I think you're right that the two different uniforms were because one group of uniformed men were soldiers from the Ingary army in Kingsbury and the other were sailors or marines from the navy.

This page ("Ingary", Wikia) says "In the movie, the Ingarian navy sails through, or possibly out of, Porthaven and returned after being defeated.", but I couldn't find a picture of sailors/marines on that site.

There's a picture on this page of Howl distracting the soldiers who harrassed Sophie: "Howl Jenkins Pendragon", Wikia

Not the answer you're looking for? Browse other questions tagged howls-moving-castle or ask your own question.