Did the Klingons damage the relay?

Michael Burnham: Shenzhou has been called to the edge of Federation space to investigate damage done to one of our interstellar relays. Blast burns around the hole are inconclusive. Were they caused by an asteroid, or was it deliberately destroyed to limit Starfleet communications? And if so, by whom? Despite the risks of our mission, I remain optimistic. It's hard not to be in the face of such beauty in this case, a binary star system. Around these two suns, ice, dust and gasses collide to form the planets future generations will call home.

SARU: Based on initial readings, I would say the relay doesn't appear to have been damaged naturally.

Georgiou: Number One tells me you suspect foul play. Despite the first officer's constant need to dismiss my ideas She apparently agrees with you.

SARU: There is something else out there.

GEORGIOU: Magnify. Is that what damaged our relay? What am I looking at? 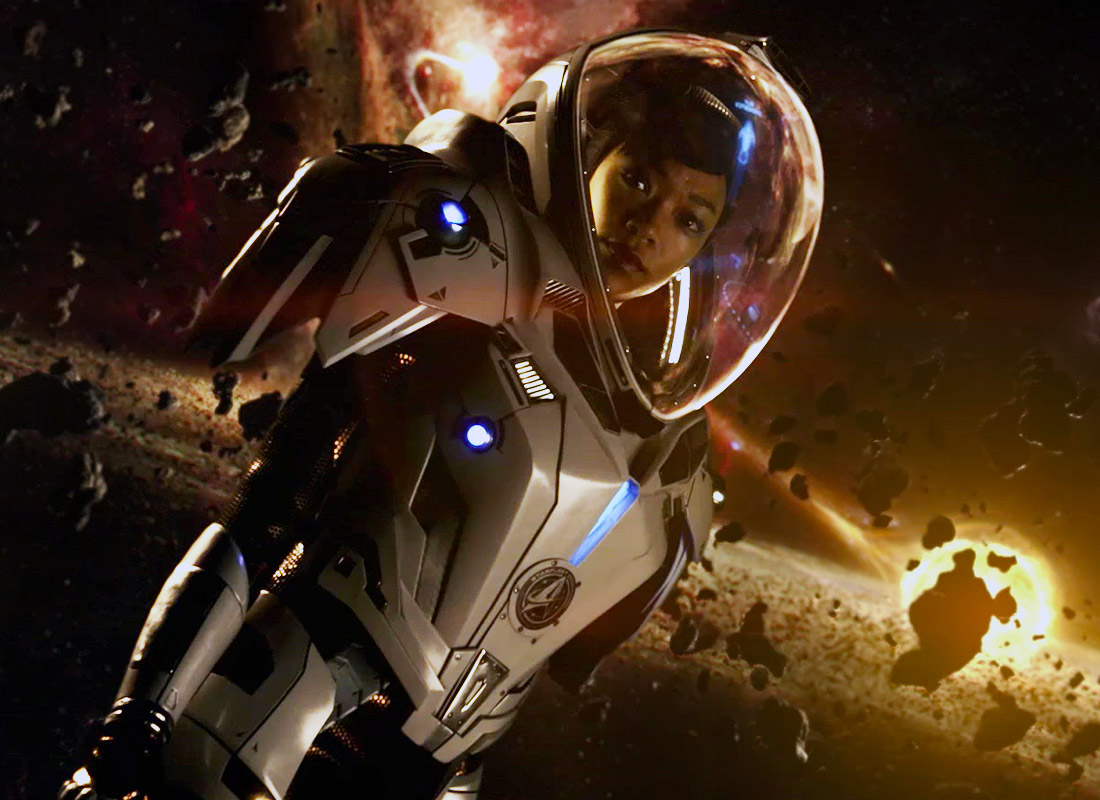 Star Trek: Discovery's story starts out in the first episode with Federation Ship: The USS Shenzhou investigating why a Federation Interstellar Relay is down, which it appears to damaged by "someone", rather than natural causes. Eventually they discover something else is "out there" and Michael Burnham goes to investigate only to discover that it is a Klingon ship, then, accidentally, setting off a series of chain reactions that starts the war between the Klingons and the Federation. This is the main plot of the first season.

My question is, Did [any of] the Klingons damage the interstellar relay?

I could be wrong, but I don't recall the Klingons (or any of the house leaders) ever taking credit for the damage done to the relay, only that the war is started when Micheal's curiosity prompts her to get way too close to the Sarcophagus Ship (a religious symbol to T'Kuvma), resulting in killing a Klingon.

Perhaps this is meant to be a longer term mystery addressed in later seasons, given the other espionage-like plot twists the first seasons reveals, but I know there is also additional tie-in material (Comic Mini-series, Novels, Production Book) and perhaps something more concrete is mentioned there?

It is strongly implied that T'Kuvma damaged it as a bait for the federation, to demonstrate strength and unify the Klingon houses

The episode opens with T'Kuvma mentioning that the Federation is coming:

T'KUVMA: They are coming. Atom by atom they will coil around us and take all that we are. There is only one way to confront this threat. By reuniting the twenty four warring houses of our empire. We have forgotten the unforgettable, the last to unify our tribes, Kahless. Together under one creed, remain Klingon. That is why we light our beacon this day. To assemble our people. To lock arms against those fatal greeting is...(in English) We come in peace.

It seems that the relay has not been damaged naturally:

SARU: Based on initial readings, I would say the relay doesn't appear to have been damaged naturally. I don't like the look of that.
BURNHAM: Well, keep looking.

Burnham quickly spots the thread during the Shenzou's mission:

BURNHAM: Starfleet's reputation for tech hygiene is exemplary. When a relay goes down, the Federation sends a ship to fix it.
GEORGIOU: You think someone's trying to get our attention?
BURNHAM: If they are, they have.

When Capotain Georgiou reports in to Starfleet, they also sense a trap:

(Reporting to a holographic Admiral.)
GEORGIOU: The Klingon flagship has a stealth mode. It's some kind of cloaking screen, unlike anything we've ever seen, Admiral. There may be more vessels out there than we know. We've reached out with every form of friendship greeting Starfleet has. They're blocking our hails.
ADMIRAL: It feels like a setup. Maybe our relay got too close for Klingon comfort, and they destroyed it to lure us out here.

The first two episodes revolve around T'Kuvma to unify the Klingon empire against a new, common enemy. He all but confirms the Admiral's guess:

T'KUVMA [on viewscreen]: Members of the Federation. What you call your most remote borders, I call too close to Klingon territory. You only live now to serve as witnesses of Klingon supremacy, to be my herald. We do not desire to know you, but you will know our great Houses, standing as one under Kahless, reborn in me, T'Kuvma!

(Discovery: Battle at the Binary Stars)

Not the answer you're looking for? Browse other questions tagged star-trek star-trek-discovery plot-device or ask your own question.

13
Morally/Legally, how could Dr. Bashir, a Federation doctor, perform the operation he did to Worf's brother Kurn by wiping his memory?
7
Why would the Federation allow a trial and request for extradition of Worf without formal relations in place with the Klingons?
5
Can the Federation's “Quality over Quantity” (k-strategy) philosophy defend itself on its own?
33
Could the Klingon Second Officer of the Pagh have killed Riker with no Federation reprisals?
12
Why is the ship called the Shenzhou?
11
In the first episode of 'Star Trek: Discovery' what was the point of the Klingon 'torchbearer' vessel?
8
Why doesn't Lorca want Michael Burnham to go to the Klingon ship?
13
Why is Burnham considered responsible for the war?
2
Differences between Enterprise and Defiant in DSC