With how many beings has Fry had “relations”?

Fry had a convoluted love life, if his relation with Leela wasn't complicated enough, he also managed the outstanding feat of being his own grandfather.

I lost the count somewhere and his Love life section on Wikipedia seems to be incomplete, as his grandmother is missing.

With how many women beings has Fry been intimate?

The Infosphere lists 12 "beings" Fry has had a relationship of some sort with:

There are actually a couple more not mentioned in the above list:

One more,often overlooked: - The Mayor's Wife: "It sure was nice of the Mayor's wife to have sex with me" Fry upon returning from the Parade Day parade

During Season 4, Episode 12, "The Sting," they show a funeral for Fry, complete with mourners in the back. You see a total of about 5 women sitting back there. His ex-girlfriend that followed him to the future, the woman who took over for Hermes, an Amazonian woman, the old lady that's always smoking, and a 5th that I don't remember. I also know that Fry dated Amy, and, as you mentioned ,his grandmother. So altogether I would go with at least 7 affairs before finally getting with Leela. 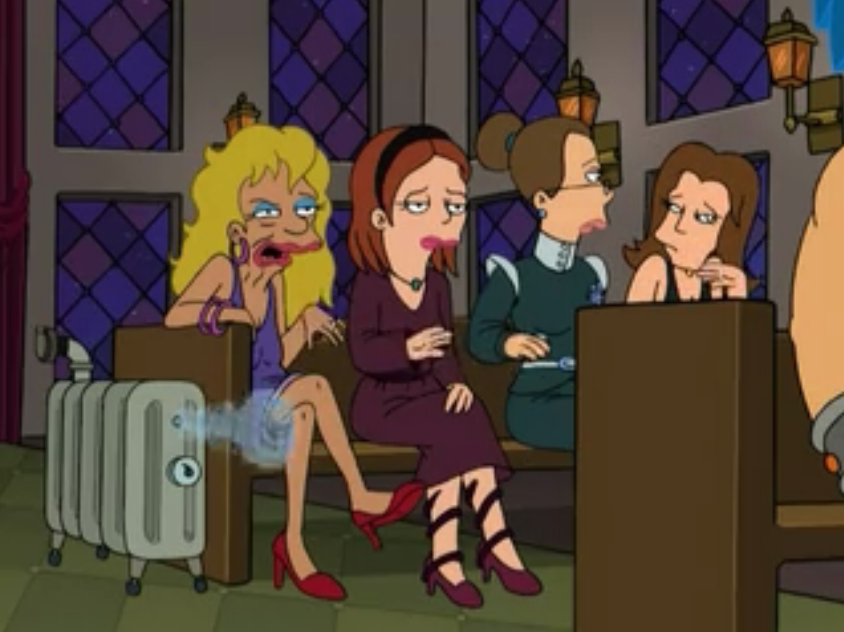 I don't remember his affair with the radiator, but from the image you can see (from right to left)

27
How many different versions of Fry are frozen in the Cryogenics Lab in Futurama?
10
How did Fry knock out the Single Female Lawyer broadcast?
5
How much DNA do Fry and the Professor share?
12
How many battleships has Zapp Brannigan lost?
9
Why didn't Zoidberg die after having sex with the professor when Fry and Leela were in their bodies?
8
How did Fry survive the alien attacks while in cryosleep?
3
How many times is the entire universe destroyed in Futurama?
2
How old is Phillip J Fry?
56
How was the cryogenization of Fry not discovered sooner?
15
In Futurama, how many beings has Leela slept with?