I'm trying to find an interesting anime from my childhood. I don't know if this portion I've seen (I don't remember the whole thing) is from an animated film or series. I remember that the art style was reminiscent of Arupusu no sho-jo Haiji (アルプスの少女ハイジ) (informally known as Heidi, Girl of the Alps) and most Studio Ghibli films — its setting is in the country, as far as I can remember.

All I can remember is a small boy somehow flying on a goose (I don't remember whether the boy was small or the goose was giant) and eventually arriving to a house in which a creepy giant bearded man lived. Then, the boy discovered that the man doesn't have a reflection in the water, and that he is a ghost. That's all I can remember. I suspect that the series originated in the 90s.

Thank you for your answers.

It has the tiny boy on a goose.

It is mostly in rural settings.

I don't know about the old man and the reflection. I've never watched Nils. I see commercials for it sometimes on TV here in Germany. 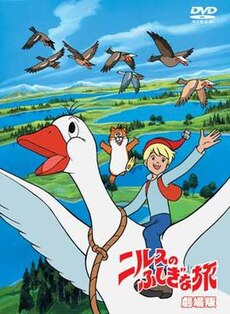 10
Boy with horse companion and tele/pyrokinesis; unknown author and date
2
Warring aliens transfer mind to transformer like robots in 80s/90s animated movie?
7
Anime about people turning into square-like, stone robots
9
Animated Movie identification (before 1990)
5
Anime with boy who can see fighting mecha robots in parallel world
12
Anime with a floating city, a boy and his girlfriend
10
Anime with a boy hiring a creature from a stone, meets a man named Dante and starts a journey to collect crystals