Story ID - Man forced to hunt to pay off debts

Searching for a novel that I remember reading in college, but probably published a few years earlier (So the late 80's/early 90's timeframe). Details that I remember:

IIRC the cover was either red or yellow, and had a picture of the protagonist in hunting gear.

I found your book.

It's a 1985 book called Skinner, saw it in a used book store this weekend.

All the basic facts in your description match. Here's a link to Amazon for the book: https://www.amazon.com/Skinner-Mcenroe-Richard/dp/055324597X 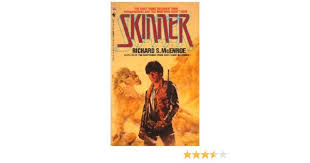 And I found a synopsis here: http://listverse.com/2008/04/18/top-10-obscure-but-superb-science-fiction-novels/

Anyway, our down-and-out anti-hero protagonist finds himself shipped off to a desert world and deeply in debt. The planet is owned and managed by a “family company” for the production of their one great monopoly… dragonhides. The critters, not real dragons but might as well be, are big nasty reptiles living in the desert sands, and their skins are nearly indestructible. A skinner goes out (with his gear and supplies brought from the company store and increasing his debt, of course) and does his best to kill these beasties without getting killed himself so he can haul the skins back. The company even has a nursery where they hatch and raise baby dragons, and that work is deadly, too. Throw in rival factions within the family controlling the company, and you have a fairly-straightforward adventure that could well have been set in a 1890s coal town. But it isn’t, and the dragon-work is interesting to read. It’ll never be a classic, but Skinner is satisfying genre-stuff.

This has some points in common with the 1989 novel by William C. Dietz Prison Planet

Searching for a novel that I remember reading in college, but probably published a few years earlier (So the late 80's/early 90's timeframe).

Details that I remember: •Protagonist was enslaved to pay off debts or sent to prison planet

Possible Check. I remember him working for a criminal group on the planet (think prison gang). But I don't remember for sure if it was a family.

Check and Check. He teams up with another prisoner that was transformed into a cybernetic attack dog and went out hunting dangerous animals to raise money and get off the planet.

IIRC the cover was either red or yellow, and had a picture of the protagonist in hunting gear. 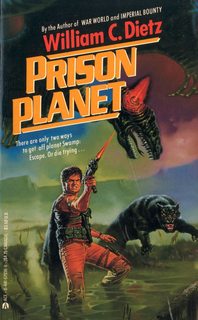 "Convicted of a crime he did not commit, Jonathan Renn is sentenced to life in the Swamp, a prison planet death row in a distant galaxy. Renn only has two choices, escape the Swamp or die in the process. Defending himself from attacks by deadly, native monster and his fellow convicts, Renn is obsessed with escaping the planet and getting his revenge on the people who set him up. Marla Marie Mendez is even more down on her luck.

Trapped inside a cybernetic dog and dropped defenseless into the Swamp, Marla can only rely on Renn and her claws to save her from the unfriendly elements. They must find a way out of the Swamp and quick before their life sentence is cut short."

11
Short story where man sells off his own memories for cash
6
Story in episodes about an immortal man
10
Anime series set in japanese village. Female protagonist forced to work in a brothel to pay off debts
49
Short story: Interstellar inspector senses “off” nature of planet hiding aggressive culture
5
A Story that Feels Very 50s Heinlein About A Forced to Retire Rocket Man