I'm searching for the name of a book where a young man was found by some agency. They told him that some people can jump into another person's mind. The eyes were important. They proved him in public party (a girl jumped into our hero and climbed on high furniture). It was in London if I'm not wrong.

There was another organization which went to kill all jumpers. Young man has to run. He was caught and he was trapped in a paralyzed body. He has to fight with mad mind of the body. He escaped (he could use skills from other people), he found two androids (only one was working) on crashed army transport.

I'm almost sure that the name is "Jumper" but I've found only story about teleport guys. In searching novel there was no teleport. Only mind jumping.

I hope it is enough to recognize. It's my obsession now ;-)

P.S. Sorry for my English 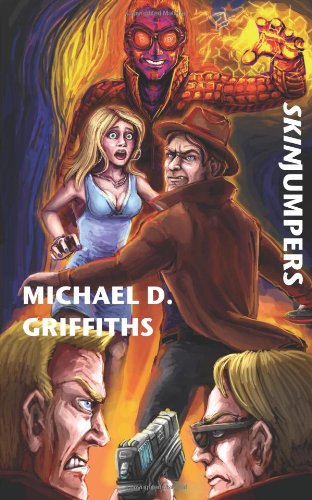 I haven't read it, but because it has "jumpers" in the title, and because it seems to be about minds jumping into other people's bodies, I'm going to guess that you're looking for Skinjumpers, a 2013 novel by Michael D. Griffiths, published by M-Brane Press. From the publisher's blog, the preface to Skinjumpers:

I first encountered the world of Skinjumpers—a strange and dangerous milieu—in a short story that the author submitted at the end of 2008 to my then-fledgling zine M-Brane SF. The story “A Clone of a Different Color” introduced New Cluster, a decaying city in an unspecified future and location, run by a corrupt and authoritarian police-state structure that resembles a mafia as much as a government and which is shot through with struggles among various factions. But it was not the post-cyberpunk veneer of this tale that appealed to me, but rather its subversive core conceit that people can move their consciousnesses, their very selves, from one body to another and somehow remain whole.

Specifically, the first Skinjumper tale evoked a topic that I’d wondered about a lot before I’d read that story: if I somehow change bodies (a perennial fantasy of mine), am I still me? Is there even actually a “me” outside my physicality? This remains a vexing question that we may—within the lifetimes of people reading this—have answered for us when we find out whether or not it is possible to separate consciousness from the body, move it into another body or possibly into a computer construct and learn whether that consciousness can survive intact or if it will be radically altered by the nature of its new physical form. I’ve wondered whether my “selfness” is really somehow a wholly different thing than my body in the way that humans tend to believe it is or if all I am is simply the compound of the literal physical stuff of my body. Is that which makes me an individual, a consciousness, actually a real thing that can be taken out of my body by some sort of futuristic instrumentality and moved elsewhere? Or is my body’s physical gender, its chromosomes, its genitalia, its sexual orientation, its age and condition and experience inseparable from the “me” of me? We don’t know this answer yet in the real world, but in the world of Skinjumpers, the answer is no: we can separate from our bodies and remain ourselves. We can even become even more our real selves by doing so.

In Michael D. Griffiths’ series of Skinjumper short stories that I published in M-Brane SF, and in this novel, a lot of questions are left unanswered. One is not given a detailed rationale as to why things are the way they are in New Cluster, but the reader doesn’t really need one either. The titular Skinjumpers threaten the social order and draw the fire of the authorities because (among other reasons) they are sex-rebels. They not only change bodies and cheat death by “jumping” into cloned replacements, but they can change physical gender. Some of them choose to do so permanently. In this story, you will meet Erin, a young woman whom you may underestimate at first because of the way she chooses to present herself. She is the long-term girlfriend of our protagonist Dak. But Dak has a particular sexual kink that is fabulously enabled in this world: he is oriented toward men who inhabit female bodies. Erin was once a guy and still somehow is even within her unambiguously feminine physical form. But she seems to not quite fit into our current understanding of LGBTQ-ness either. She and he are a shade different than what is enabled by or even understood in our so-called “real” world. Underneath their more or less conventional gender self-portrayals, they are both fascinatingly queer.

11
Searching for a book of short stories: blind man hears a monster 'shuffle, shuffle, click, click' who is tracking a man that opened Egyptian tomb
7
Young man turned into cyborg to help defend city against monsters
5
Late 70's/early 80's fantasy movie similar to Beastmaster
13
Fantasy book about an assassin turned investigator
6
70s/80s Radio drama about a young man who can't remember his name, stranded on a planet run by robots
17
Temporary mind transfer for entertainment
4
Book identification: technologically-enhanced man (1970s/80s YA)
5
YA horror mystery book with mentions of witchcraft and Joan of Arc
3
Time travel book involving an agency that fixes the past, which is largely meddled with by strawman liberals
6
Looking for a book with car crash & temple cats