How are the engineer's ships made in such a way that they have rubble debris throughout?

I've only watched Prometheus once, but I believe the tunnels in the ancient Engineer's ship were full of debris that looked a lot like rock fragments -- and not like chunks of metal. And, IIRC in Alien the ship was fairly clean inside...

Why was the ship in Prometheus full of rubble? Is there any in-universe explanation of the construction of these ships that could explain it?

Short answer: the ship tunnels are not full of debris.

The walls are markedly different inside the ship than in the rest of the compound. Where we see rubble the walls are carved out of stone, albeit in a very similar style to the walls of the ship. The ship walls however are much more ornate and apparently made out of metal or another manufactured substance, not carved from rock.

The majority of the structure mapped is NOT the ship, but rather a huge complex. The ship is at the end of the long tunnel leading away from the complex towards where Prometheus landed.

Here is a still of the holomap of the base. Note the long tunnel on the right, this leads to the alien ship. 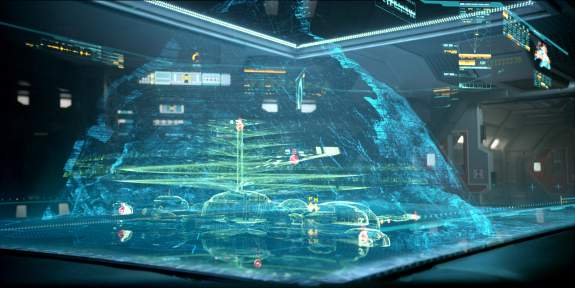 Here is the holograph of the alien ship. You'll notice it is not actually replicated/present in the previous image, though there is consistently similar style of curvature...

Do keep in mind that these holomaps are NOT at the same scale!

17
What is the purpose of this room on board the Engineer's ship?
11
Why would the engineer's ship play the holographs of space jockey drama?

7
What made LV 426 special amongst all the other candidates along the Nostromos path that made it seem worth terraforming?
4
How common are androids in the world of the Alien franchise?
4
Why are the engineers completely different between movies?
9
How is it that the alien grows to full size in like 5 minutes in Alien Covenant?