Where does the energy come from in the Dune ecosystem?

In Frank Herbert's Dune books, the planet Arrakis has an interesting and well thought-out alien ecology. As summarised in this answer, the sandworms eat sandplankton (which consists, at least in part, of larval sandworms), while the sandplankton eat the spice, which is produced by side-effects of the sandworm life cycle.

However, one thing has always bothered me about this: where does the energy come from? On Earth, most ecosystems are powered ultimately by sunlight, while others are powered by chemotrophy. But either way, you need a source of energy or life can't survive.

There seems to be no substantial photosynthesis on Dune, since the planet is almost all either open sand or bare rock. (Some plants are mentioned, but they are all familiar Earth species and were presumably brought there by humans.) Perhaps the sand plankton, or even the sandtrouts or the sandworms themselves, are autotrophs --- but if so, where do they get their energy from? In short, where are the primary producers of the Dune ecosystem, and what do they eat?

To the best of my knowledge, this issue isn't mentioned in the original book, but Herbert wrote a lot of sequels, and it seems that having a plausible ecology is something he cared about, so I'm wondering if he addressed this point in any of his later works.

Incorrect assumptions in the question

According to the Dune Encylopedia the world of Arrakis is not ecologically barren. There are native plants which indicates that photosynthesis has been occurring for geological amounts of time.

The tip, the hollow once occupied by the tooth's nerve, customarily held a small amount of the most deadly poison available, most often a mixed derivative of the native desert plants.

And there are also indications (such as salt flats) that the world itself was previously waterlogged, presumably prior to the introduction of the sandtrout. This suggests that there are subsurface remnants of those biological processes.

So what are the worms (and their offspring) eating?

The Encyclopedia includes a very detailed descripion of the Dune ecosystem and lifecycle of the Shai-Hulud.

The large adult Sandworms are consuming nutrients directly from the air as well as some from processing dirt. The energy required to catalyse these chemical reactions comes from static electricity and heat which both derive from friction. The result is a yield of a greater input of energy than output of effort.

Respiration was accomplished through pores in the tough, silvery-gray outer skin. There was no circulatory system as such, since most of the nutrients were in the form of gases. Each segment had a series of membrane "baffles" to absorb nutrients.

METABOLISM OF THE ADULT WORM: The adult G. Arraknis was a true autotroph, producing all of its nutritional needs from inorganic compounds on the planet surface. The energy to drive the synthetic reactions was obtained by the travel of the worm through free sand which caused an electrostatic charge differential. The resulting electrons passed to an electron acceptor believed to be a cupri-cyanide compound, the reduced form of which accumulated in the worm body. The electron donor was probably SiO₂, although the precise mechanism is unknown. Molecular oxygen was evolved during the reaction. The presence of water caused the electrons to be discharged abnormally because the anions and cations on the worm body dissolved in free water. Thus, water was a poison to the worm.

The heat from the friction of the travel of the worm through sand drove the synthetic reactions to completion. Most of the nutrients produced were gaseous: methane, ethane, propane and butane, butyric acid, propionic acid, acetic acid, and formic acid. Excess gases not utilized for nutrients were literally ignited by the heat of sand travel. Thus, the worm always had a flame deep within the body cavity. The excess heat also aided in driving the synthetic reactions, keeping the nutrients in gaseous form for adsorption, and vaporizing any stray H2O.

Nutrients were absorbed from water and air through the cell wall.

In their later stages the sandtrout became autotrophs like their older relatives, converting inorganic substances into organic ones via a form of chemical synthesis.

The chemical reactions during the spice blow triggered changes in the surviving larvae, stimulating them to join their bodies in a premetamorphic stage. At this point, changes in metabolism began, so that the combined larvae became similar to the adult worm. Water gradually became toxic, and rudimen¬tary autotrophy developed.

The cycle is poorly understood

The spice cycle was never fully explained by Herbert. Several points along the cycle are speculative, such as the exact relationship of the plankton to the worms. For example, we still have no idea where the plankton come from; them being produced by trout or worms is only ever implied by their presence on planets altered by trout. (See the image below for reference.)

The key oddity I noticed is that the sand worms seemingly farm their own species as food. This makes little sense from an evolutionary perspective due to the red queen hypothesis: predator and prey wage a constant evolutionary arms race. The worm's hunger directly competes with their reproduction, thus they would be pressured to cease consuming the plankton. The only way this could be stable is if the relationship is a highly refined symbiotic one, similar to (albeit more extreme than) the real life Dracula ants that are known to drink the hemolymph of their own larvae and pupae.

Not only that, but feeding on plankton would make the worm a filter feeder. This contradicts them being active hunters, which itself is infeasible. The worms are simply too big for active hunting to provide sufficient nourishment, and thus should be much more docile than the territorial predators seen in canon. Unless, as the novel suggests, they attack only to defend the spice and their offspring from other species.

These oddities could be explained by the novels' implication that the spice cycle is a xenoforming agent. In other words, the spice cycle is carefully fine-tuned to be utterly self-reliant in order to transform hostile environments into ones suitable for its own propagation. 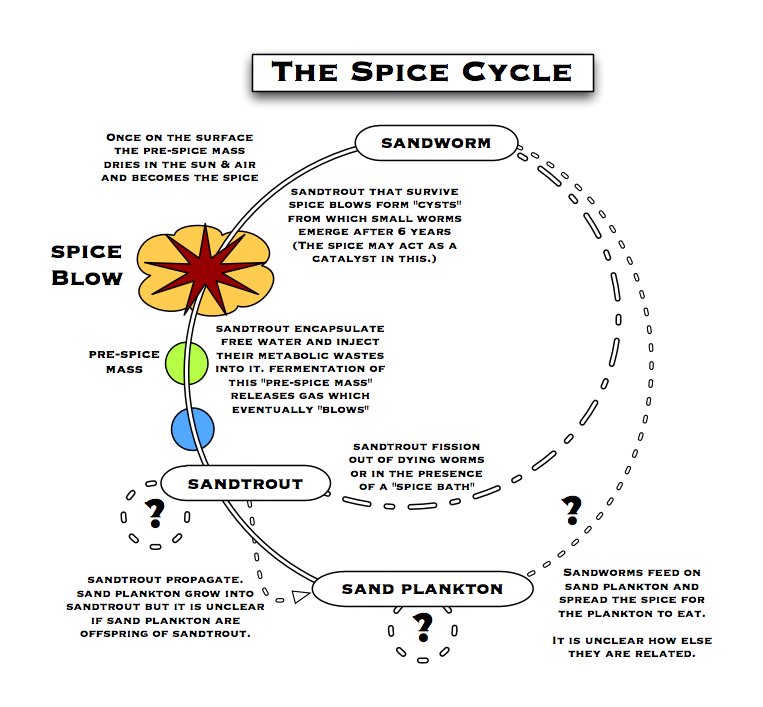 Herbert simply made a chemistry error. That's the only way I can explain it.

Dune states that the worms are "oxygen factories," which is where the Dune Encyclopedia got the idea that they were autotrophs. It is not feasible for the adult worms to be autotrophs because autotrophy does not provide sufficient energy to power animal metabolisms on macroscopic scales. Although some photosynthetic jellyfish and sea slugs have been discovered on Earth, they are quite rare presumably due to being inefficient compared to vegetative autotrophs.

The worms are described as having the biological equivalent of internal furnaces, which contradicts the statement about oxygen production because the process of combustion (and respiration) consumes oxygen. Realistically, they should be consuming oxygen rather than producing it.

The fact that the worms consume plankton in the first place would indicate they were heterotrophs, not autotrophs. Realistically, the plankton are the ones that would most likely be autotrophs.

The Science of Dune by Sibyelle Hechtel includes an essay that contradicts the canonical explanation and posits that the cycle instead gets its energy from hydrothermal vents, although it makes a number of errors such as forgetting about the sand plankton. It also posits, similar to the Because Science video on sand worm motion, that the sands of Arrakis have a special composition to make them easier to swim.

It simply is not feasible for the worms to perform oxygen evolution. This requires more energy than the worm should feasibly be able to acquire. Why would they evolve to do this when it is a complete waste of energy? They would not need to produce it for the benefit of the trout and plankton, since those organisms could feasibly produce their own oxygen by splitting it from water.

The simple fact that the worms react explosively to water indicates that their biochemistry is vastly different from terrestrial life. To even begin to explain that would require delving deeply into speculative biology and far away from Herbert's work. Herbert's explicit suggestion that the trout sequester water (and thus turn planets into deserts) specifically for the benefit of the adult worm only raises more questions about their undoubtedly idiosyncratic evolutionary history.

The real life condition aquagenic urticaria is the only thing that I feel could feasibly explain the disparity without resorting to complicated biochemical explanations. Rather than the worms not incorporating water into their biochemistry, they have to consume it in a packaged form that would not irritate their sensitive tissues.

Not the answer you're looking for? Browse other questions tagged dune biology frank-herbert or ask your own question.

2
What is the energy source for the spice-sandworm cycle?
31
What do the dune sandworms eat?

36
Which names and terms in the Dune series come from Hebrew-inspired phrases?
16
Why didn't the Empire transplant sandworms to other planets?
5
What are the primary producers of Arrakis?
9
What does the word "thumper" mean when used to measure distance?
14
How did Arrakis become a desert devoid of oxygen and then habitable again?
22
Did the big smuggling outfits operate interstellar vessels that were not controlled by the Spacing Guild?
11
How do the Fremen make plastic?
18
Where is food found on Arrakis?
18
How would the Bene Gesserit get their hands on worm bile?