How could a TARDIS destroy the whole universe?

In the episode "The Big Bang" the TARDIS is blown up by the Silence to kill the Doctor presumably.

But why would that result in the whole universe ceasing to exist? How can a single TARDIS contain that much power to destroy time itself, and why was that specific day so important? The 26th of June 2010, the day that Amy gets married. Why does the TARDIS have to blow up exactly then?

And why is that the base code of the universe?

There are a number of possible ways a faulty time machine could destroy a universe. These can be catalogued under three headings:

1) preventing it retroactively, this is the opposite of a boot-strap paradox as instead of part of a universe causing itself (and the universe it is in), part of a universe anulls itself (and the universe it is in). Consider Dirac's hypothesis of the universe as a particle moving forward and backward in time, interacting with itself until all matter is woven from it - then blow that particle up, before it interacts with itself the first time. [Not in Doctor Who, but in other science fiction Barrington Bayley has a short-story in which this happens].

2) blowing all of it up at once, for example in Douglas Adam's unmade Doctor Who film "Doctor Who and the Krikkitmen" [recently novelised by James Goss], and the ultimate weapon works by opening space-time conduits between the cores of all suns causing simultaneous hypernovae. As the destruction of the TARDIS explicitly causes the cracks in the universe, one hypothesis would be that they link suns in such a way.

3) Affecting space-time itself. A hypotheis explained here: https://cosmosmagazine.com/physics/vacuum-decay-ultimate-catastrophe suggests that if our universe is of a certain kind, specific interactions could collapse the vaccuum itself. Such an effect would propogate at apparent faster than light speeds and would conceivably unravel space-time.

None of the above is expressly stated within the fiction, but all are possible without postulating infinite energies within the TARDIS itself.

I got this from Wikipedia I think it will answer your question completely. 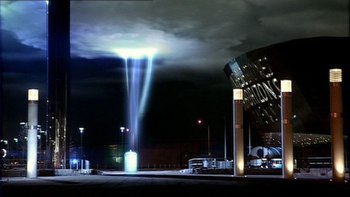 The extrapolator and the TARDIS begin to rip open the Rift.

The extrapolater is like a surf board in the TARDIS.

The tribophysical waveform macro-kinetic extrapolator — or extrapolator to "save time" — was a long, flat device. It could be ridden like a surfboard. It would wrap the user in a protective bubble, enabling them to ride the energy from a vast explosion.

So maybe the reverse would cause an explosion through time that would decimate reality.

In "Boom Town", the Ninth Doctor refers to the Rift in the plural, indicating that there are others elsewhere. In series 3 episode "The Sound of Drums" (2007), the Master (John Simm) also refers to the Doctor sealing the rift at the heart of the Medusa Cascade, deep in space. The Daleks later planned to make use of this rift in spreading their Reality Bomb ("Journey's End", 2008). When explaining the prevalence of foresight abilities in Pompeii, the Doctor explains Mount Vesuvius temporarily opened a Rift in time and space, which accounts for this, in the episode "The Fires of Pompeii" (2008). In the series 6 episode "The Doctor's Wife" (2011), the Eleventh Doctor (Matt Smith) travels through a time rift to a location "outside" the universe. He comments that his TARDIS should refuel by virtue of being exposed, as with the Cardiff rift, to temporal energies.

25
What Made the Tardis Blow Up?

25
What Made the Tardis Blow Up?
19
Was Gallifreyan history really changed in The Day of the Doctor?
7
How did the Earth survive before The Doctor rebooted the universe?
15
How can Ashildr pilot a TARDIS?
8
Why was the Silence ship from "The Lodger" abandoned?
7
How did the Time Lords put a whole "Star" in a Tardis?
2
How did the TARDIS blow up at the every point of the universe?