Did Shatner not attend the Enterprise shuttle unveiling?

In the answer to this question, there is a picture of the cast of Star Trek attending the unveiling of the NASA shuttle Enterprise (Which was apocryphally named from a letter writing campaign by the series' fans): 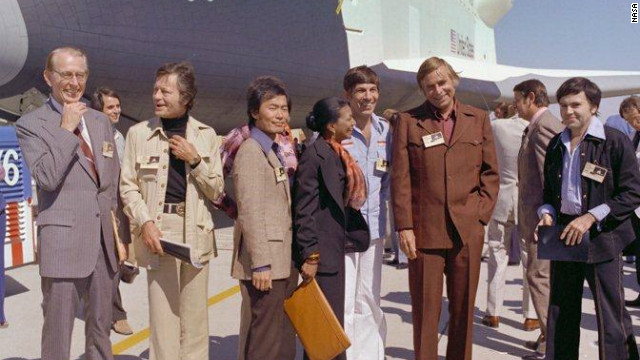 There are several other images available from the unveiling, however William Shatner appears in none of them, and I cannot find any indication that he was present at the event.

Did he not attend, and if so, is there a reason why he didn't attend?

According to most sources I've found he did not attend, though none of them have actually given a reason.

The following passages all make reference to Shatner not attending but either give no reason or it's just speculation.

Just over a week later, the Enterprise was unveiled to the world at the Palmdale California assembly facility in front of a crowd of a couple thousand onlookers, high-ranking NASA officials, and Gene Roddenberry along with most of his Star Trek cast. William Shatner did not attend.
Observer, Space Shuttle Enterprise: From Richard Nixon to New York City

Originally slated to be named the Constitution, the first ever test Shuttle was renamed Enterprise in response to a massive write-in campaign spearheaded by Trekkies. In 1976, when Enterprise was rolled out of its plant in Palmdale, California, Roddenberry and most of the cast of the original series of Star Trek (sans Shatner, Majel Barrett, and Grace Lee Whitney) were in attendance, and the show’s theme music was played (in my mind, this is time machine destination #1).
ScienceBlogs, Five Coolest Moments in the History of the Shuttle Program

But where's is Shatner? He probably didn't attend, because he's too cool for school. Or maybe he was banging a NASA girl in the shuttle bay, who knows. But all is forgiven: At least he went back to NASA to record the last wake up call for Discovery.
Gizmodo, The Star Trek Enterprise Crew Saluting the Real Enterprise

If you don’t recognize them, that’s the cast of the original Star Trek television series, minus William Shatner who was apparently too important to show up. (Actually, I don’t know why Shatner wasn’t there, but it’s no secret that he frequently behaved like a colossal jerk during the ’70s and ’80s.)
Space Shuttle Pic of the Day: Enterprise Makes Her Debut

Therin of Andor: Shatner made a habit of being absent from such high profile events, probably his agent holding out for an appearance fee. He was also absent from all the other actors' Hollywood Star Ceremonies (except Nimoy's and Roddenberry's), and more recently George Takei's wedding.
WHF: He was probably the only one with a job at the time and had to work.
THE TREK BBS: Where Was Shatner At The Enterprise Shuttle Rollout?

TheTeamCubed: I think he might have been filming "Kingdom of the Spiders" at that time.
StarFuryG7: He may have been in the process of shooting something, was committed to the project contractually, and couldn't get there. I thought I had seen pictures of him at this event though. He may have been there, though not in that particular shot for some reason.
/r/startrek, Why wasn't William Shatner present when the Enterprise shuttle was launched?

As @Valorum comments below it would seem like he wasn't filming Kingdom of the Spiders though as productions hadn't started yet.

He wasn't filming Kingdom of the Spiders. "The picture was filmed in Camp Verde and Sedona, Arizona, in early 1977; released later the same year. Since then, it has become a late night classic."
http://www.movielocationsplus.com/bts/kos.htm

17
Was William Shatner really a jerk in the 60s, 70s, and 80s?
4
Did Gene Roddenberry actually hate that the test orbiter was named Enterprise?

19
Why did the Enterprise not react to human genetic engineering?
18
Why was Nimoy in the 2009 Star Trek movie and Shatner not?
13
Is there a canon explanation for the NASA Space Shuttle Enterprise name?
26
When did William Shatner have a relationship with Joan Collins in the 1930's?
6
Story in Star Trek novel - Shatner, Nimoy, etc beam to the real Enterprise
7
Why did Lorca attend the meeting in person?
17
Was William Shatner really a jerk in the 60s, 70s, and 80s?
28
Why did the Enterprise not have any HAZMAT suits?
3
Why not modify a shuttle craft?