Can't remember the name of this animated movie

I have watched an animated movie a year ago where a boy invents a sort of time machine where people can see their past and future in it. But then his machine gets lost or something (I don't actually remember). Later he meets his son who jumps from the future and helps him to get back his machine after numerous fights and adventures. Can anyone please tell me the name of this movie or at least a hint because I liked it a lot but now I can't recall it? 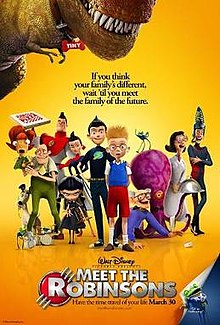 A boy named Lewis invents a machine that can show you memories of the past. It gets stolen, then another boy shows up (from the future) with a time machine. Lewis turns out to be the the other boy's father.

Lewis eventually gets his machine back and goes on to become a famous inventor and scientist, and eventually builds the time machine that his son uses to help him recover his memory machine.

Along the way, Lewis and the other kid stop a crazy guy named Goon from taking over the world with his robotic bowler hat (actually one of Lewis' failed inventions) and the stolen memory machine.

12
Movie in which water is imported from past
9
Movie with line “Remember the word Yahoo”
12
Looking for title of sci fi short story about attempts to colonise planet (Venus?). Scientist and his dog are main characters
4
TV series where boy with glider visits world in another dimension
6
Animated movie with father who creates portal and gets captured by giants. His family go to rescue him
12
An animated sci-fi movie with a fully armoured antagonist and a pale looking child
44
Movie where a boy is transported into the future by an alien spaceship