Lately I've been trying to remember a book I read a while ago, about a group of time-traveling vampires and (possibly) including the one and only Count Dracula himself.

The book was written in English by an American author probably in the 80s, but I read it around the mid-90s. It was a paperback with around 200+ pages or so and if I remember correctly, the version that I had, had a red cover.

The story is that vampires really do exist in our society and they really fear the sign of the cross and daylight. However, due to the modern surveillance and policing methods of our society, feeding unobserved is becoming more and more difficult, thus being led to extinction as they are also hunted by the Van Helsing family (descendants of the famous vampire hunter of the original Bram Stoker story).

Some time in the near future only a handful of them are left and are led by the Count himself. At the same time, a scientist makes a time-machine and becomes an instant celebrity in the news. In a desperate attempt, the Count and his team attempt a series of heists: First they steal a few nuclear bombs from a nearby base and then the time-machine itself, with the goal to travel back to the Stone Age when humans are not a threat and explode the bombs to make a nuclear winter, thus walking the Earth unmolested and enslaving the humans of the time, so as to keep them as cattle.

However, at the very last minute they are stopped by our hero (a Van Helsing of course), albeit, with him and his love interest being stuck in the stone Age with the last few of the vampires, thus starting the cycle once again. Finally, one of the bombs exploded and the mushroom cloud and the bright flash cause the vampires' fear of light and the cross.

I tried to provide as many details as possible, but my google-fu is giving me lots of irrelevant results due to the terms time-travel, Dracula, vampires etc, and I may be confusing some of the details with other stories, so my apologies. Any help is appreciated!

Could it Brian Aldiss's Dracula Unbound? That does feature vampires travelling through time, as well as Bram Stoker, Dracula, and a nuclear bomb going off in prehistoric times. 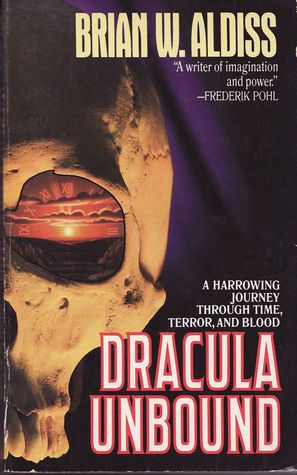 In the barren dust of the far future, the sun leaks energy in a darkening sky and the only remaining humans are imprisoned by spectral bloodthirsty beings. Back in the brilliant Utah sunlight of 1999, two ancient graves yield evidence that a species of human coexisted with the dinosaurs. Linking these scenarios is impetuous inventor, Joe Bodenland, who has just created a time machine that manipulates time to disperse of hazardous waste.

However, it looks like the vampires set off the nuclear weapon in 2599 and it's the heroes who bring one to the past, killing off the pterosaurs that will evolve into vampires.

Search terms of book vampires dracula "time machine". Took me a few other searches with the book title to get details about the bombs, though.

Not the answer you're looking for? Browse other questions tagged story-identification time-travel dracula nuclear-weapons or ask your own question.

15
A 1950/60s story about time-traveling robots - please help identify
13
Is Marty McFly Traveling to Parallel Universes?
3
Book Title ID- Asteroid with Time Traveling Tunnel?
14
Book about a time-traveling dinosaur hunter
3
Series with time-traveling scientists who collect prehistoric creatures
18
Story about a person trapped in a burning building and time traveling
6
Romantic manga with time-traveling police officer
0
In BBC's Dracula series, how did Dracula and Van Helsing end up having sex at the center of the Sun?