I read a Sci-Fi (I think) book some years ago about a man that travels to another world for a diplomatic mission for a company I think, in this planet he went to a house like a tower or something like that, where a family of red haired people lived, they were led by a woman that was very important, and I think I remember they had a sort of mental powers or stuff like that. The man at the end falls in love with the woman. Other things I remember are that the title had the word sun in it, at least that’s what I remember, and also that it was part of a series, it was the part 4 or 5 I think. Thanks a lot.

This is almost a dead ringer for Marion Zimmer Bradley's The Bloody Sun (almost, as it is missing the "sent on a diplomatic mission" - but that comes by in another of MZB's Darkover series).

In The Bloody Sun,

Check. Jeff Kerwin, an orphan, works for the Terran Space Force and puts in a transfer to Darkover, the planet of his birth, in order to to learn about his past.

Check. He is led to Arilinn Tower by the darkovan Kennard Alton.

where a family of red haired people lived, they were led by a woman that was very important

Check (almost). It is not a family but a Circle of Comyns, who have red hair (and not rarely, six fingers). The woman was Elorie of the House of Ardais, who was Guardian of the Tower. The Guardians are one of the great forces on Darkover, as they can control the matrix circles. Given the power demonstrated by matrix users during the Ages of Chaos, this is more or less equivalent to being in charge of a small nuclear arsenal.

and I think I remember they had a sort of mental powers or stuff like that.

Yes, that's the laran, the power that the Comyn derive from their alien chieri blood. It turns out that Jeff tests positive to laran, and Kennard successfully employs his Alton Gift to unlock Jeff's powers. These turn out to be the Ridenow Gift, which means that Jeff is the lost scion of Ridenow, son of Cleindori Aillard and nephew of Damon Ridenow. Also, he can work in Arilinn as a Keeper.

The man at the end falls in love with the woman.

Not quite at the end, and it's more of Elorie falling in love with him, but in the end Jeff does marry Elorie Ardais.

the title had the word sun in it, at least that’s what I remember, and also that it was part of a series, it was the part 4 or 5 I think.

The Bloody Sun is the thirteenth book of the Darkover series, the third of the "Forbidden Tower" story arc.

Could it have been Damia's Children by Anne McCaffrey? Family with redhaired people (although the haircolors are pretty varied), led by a important woman with mental powers, living in a tower. In the prior book, Damia, Lyon falls in love with Damia, his ward: 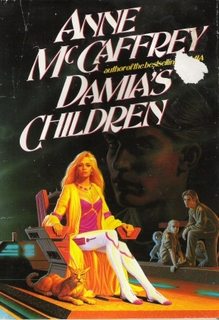 Damia is told mainly from the point of view of Afra Lyon, the Rowan's assistant, a character first introduced in the previous book. It begins with his childhood on the strictly regimented colony planet orbiting Capella. It then shows Lyon's view of the events of The Rowan, followed by his helping to raise Rowan and Jeff Raven's children, especially the precocious and powerful Damia. Lyon later realizes that he has fallen in love with his young ward, which gives him rather conflicted feelings. In the end, the two wind up defending humanity against an even more dangerous alien enemy than the Hive faced by the Rowan.

However, the word "Sun" does not appear in any of the series's titles.

This sounds like one of the Darkover series by Marion Zimmer Bradley. Darkover is a planet that was colonised by a mainly Celtic people. They therefore have a lot of redheads, who have telepathic powers called laran. The planet was cut off from civilisations for many years, then rediscovered. The groups of telepaths lived in towers, where they worked.One of the books was called The Bloody Sun (the planet's sun is red).

6
Which Darkover novel is this?

10
Story Identification: Novel in which aliens drain sun's energy
6
Fantasy book about girl with hair that made people get crazy
8
Red-haired woman bethrothed to silver-haired prince, they are in charge of an island?
10
Anime about a red haired boy suddenly being transported into another world
16
1980's sci fi book series, subspace is a sponge, young man in emergency suit can propel himself by sucking in the sponge stuff
6
Looking for a book with car crash & temple cats
15
Story identification - Desert planet with "Makers"