Novel about a young woman, and the doctor who mistakes her for a poltergeist

So, this is super vague and I apologize, but something sparked my memory and it's been bothering me, so here goes...

I'm looking for a young-adult book I read probably in the early 2000's. It was possibly older than that, but I doubt it was earlier than the seventies or so, and was likely somewhere in my elementary school. I have no information as to what was on the cover.

In terms of plot, I think it involved a haunting of an old house and two (or maybe three) children. Either the older or middle one was a girl of twelve or fourteen. When the ghost/spirit/whatever starts moving things and causing havoc in the house, I think the parents call a doctor. He turns out to be a sinister-type character who wants to take the girl away, believing her to be the source of the disturbances. I think the ghost or whatever takes a liking to the kids and tries to help, but for some reason I don't think it can talk or manifest, only move things.

I know it's not much to go on, but it's been on my mind all day. Any help would b great! 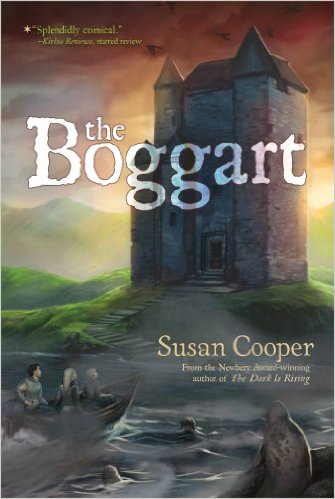 A timeless spirit of mischief, the boggart has lived in Castle Keep since ages past, wreaking havoc upon the MacDevons who've lived there. His job, as far as he's concerned, is to keep life "interesting" for his beloved family. He's been too busy filching apples, knotting shoelaces, and trashing the kitchen to pay much attention to the march of history. But when the last MacDevon dies, the boggart has to come to terms with a new set of owners: the Volnik family from Toronto, who have no intention of inhabiting the drafty tumbledown castle that they've inherited from their great-uncle MacDevon. The sulking boggart is most displeased to find himself mistakenly shipped to Canada inside an antique desk destined for Emily Volnik's room. But once out and about, he is fascinated by this new world of peanut butter, pizza, and electric gizmos. Filching oatcakes quickly becomes a thing of the past as the boggart finds all sorts of new ways he can drive this modern family crazy. Possessing the t.v. set? No problem. Booby-trapping the house for Halloween? Well, if kids can do it, boggarts can do it. The traffic lights in downtown Toronto? Wouldn't they look prettier if they were another color? But when the boggart's pranks send Emily to the hospital, she and her brother Jessup must find a way to pry the boggart out of his new home and send him back to the castle where he belongs.

Back in Scotland, the mail carrier swears his van is haunted when he delivers Tommy's Christmas package all the way from Canada. And the video game that Tommy finds inside seems to have a mind of its own! When Tommy crashes into the black hole himself, the boggart bursts forth from his own computer, home at last and free. The happy boggart returns to Castle Keep, ready to welcome its new owners with a whole host of boggart tricks.

Not the answer you're looking for? Browse other questions tagged story-identification books young-adult ghost or ask your own question.

12
1970s space cadet training novel for young adults
8
Young adult novel with dragons, magic, and ends weirdly
4
A horror movie similar to poltergeist and the conjuring
6
Young Adult Fantasy novel about some boarding school, classmates dying, and passing on?
3
YA book about a ghost boy and the attempt to put him to rest
7
Kindle book about a woman who helps remove ghosts from houses
8
Book about a teenage boy who helps ghosts stop a poltergeist and they help him win at football
13
A novel or novelette length ghost story, “You can't trick me the same way twice”