70s? 80s? Book where a Cowboy/Gunfighter is possessed by an alien

Probably read 30-40 years ago in USA in English. Pretty sure it was a book and not a short story.

An alien is on Earth in the western US in the 1800s. I'm not sure if it crash landed and was looking for materials to fix ship, or looking for another of his kind (Rescue? Or Manhunt?).

He inserts himself into the body of a Cowboy and/or Gunfighter. (Similar to Hal Clement's "Needle" alien? Or maybe as a spirit/psychic type entity?)

The Alien has a limited number of "power boost" devices (like 4-5). I seem to recall them as being referred to as seeds or beads, or something like that. When used (consumed? crushed? interacted with?) they allowed the alien to do things. I think there are a couple things possible, but only recall one. Slowing time for 10-15 seconds for the alien, while 1 second might pass in the real world.

I do not recall if the Cowboy was aware of the alien (communicating with him) or the alien was working/controlling the cowboy through his subconscious.

About the only scene I recall from the story is that the Cowboy/alien is in some small western town, and gets called out for a gunfight by a local young tough kid. They go out and get ready in the street to draw and shoot. At this point the alien uses one of his power boosts to slow time, trying to think what to do or how best to get out of this situation. If he kills the kid, the town's people will not be happy and he won't be able to get much help.

So while time is slowed for him, he is thinking about various plans and possibilities. Meanwhile during all this slow time, the Kid has slowly reached for and started drawing his gun, and started raising it to shoot.

Finally the alien decides on a plan, and while time is still slowed, causes the cowboy (either by directly controlling? or subtly guiding him?) to pull his gun, aim and shoot the trigger guard of the kid's gun. Which collapses and cuts his trigger finger off, (or maybe the bullet just shoots off the finger) and stops slowing time.

The towns folk were shocked; all they saw was the Kid draw his gun, start to line up to shoot, and then lightning-fast the cowboy drew, aimed, and blew off the kid's finger. So the kid's alive, and since he can't shoot a gun anymore, maybe he will mellow out and stop being a tough guy troublemaker around town and settle down. The townsfolk are happy, so the alien will be able to try and get the assistance/info he needed from the town/townsfolk.

Andromeda Gun, written by John Boyd, published in 1974, is a good match. 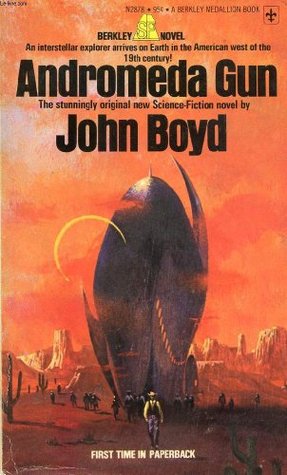 G-7, emissary of an alien race of energy-beings, is sent to earth to explore for energy sources his race needs.

But when G-7 takes over the body of Johnny McCloud something happens — instead of exercising total control, G-7 is changed, involved in McCloud's personality and emotions. And Johnny McCloud, the amoral gunfighter, is changed too. ANDROMEDA GUN is the story of a strange symbiosis of man and alien, and of crucial events upon which the future history of Earth depends. Johnny McCloud/G-7, the symbiote, can change Earth's history!

And yes, he does shoot off a kid's trigger finger.

"We come in peace," Bryce Peyton called. "I come to thank you, Ian McCloud, for shooting some sense into my boy Billy's head. After you blowed off his trigger finger, he give up the idea of being a gunfighter, and he's down on the south forty now, bandaged hand and all, plowing for winter wheat. All that boy was ever good for was farming, and now he knows it."

17
Pre-80s movie with an alien monster who looks like a rock
7
Trying to remember the name of a grade-school book about an alien in a cereal box
15
Hunting a Story I read about a small town exterminator who murders an Alien
9
70s or 80s Book. Post Catastrophe, Sheriff tries to hold town together, and keep his schizo wife from killing him
8
SF book, early 1980's, Galactic gunfighter
6
'80s movie with a humanoid alien in a glass casket
16
Story set on a world where the law requires everyone to carry a gun