Why did Mrs Weasley use tongs?

"Never mind, Amos,” said Mrs Weasley. “Sure you won’t have a bit of toast or anything before you go?”

Mrs Weasley took a piece of buttered toast from a stack on the kitchen table, put it into the fire tongs, and transferred it into Mr Diggory’s mouth.

“Fanks,” he said in a muffled voice, and then, with a small pop, vanished.

*– Harry Potter and the Goblet of Fire, Chapter 11 (Aboard the Hogwarts Express)*

if she could have simply handed him the toast, why use tongs?

Because the book very clearly states that his head is in the (red hot) flames in their fireplace.

Amos Diggory’s head was sitting in the middle of the flames like a large bearded egg. It was talking very fast, completely unperturbed by the sparks flying around it and the flames licking its ears.

If she'd been stupid enough to put her bare hand into the fire to pass him the toast, she would have been burned.

Note that on another instance when using fireplace magic to communicate, Crookshanks was unable to get too close because of the heat.

“Sirius!’ he said.
Harry whipped round. Sirius’s untidy dark head was sitting in the fire again. ‘Hi,’ he said, grinning.
‘Hi,’ chorused Harry, Ron and Hermione, all three kneeling down on the hearthrug. Crookshanks purred loudly and approached the fire, trying, despite the heat, to put his face close to Sirius’s.
‘How’re things?’ said Sirius.”

Harry Potter and the Order of the Phoenix, Chapter 17 (Educational Decree Number Twenty-four)

Because it has historically been proper etiquette to serve such food to other people with tongs, rather than touching it with one's hands.

Household guides and books of etiquette going back at least as far as the 19th century talk about all of the things properly served at meals with various sorts of serving tongs: cubed sugar, pickles, sandwiches, cake, sardines, asparagus, steak, and so forth. 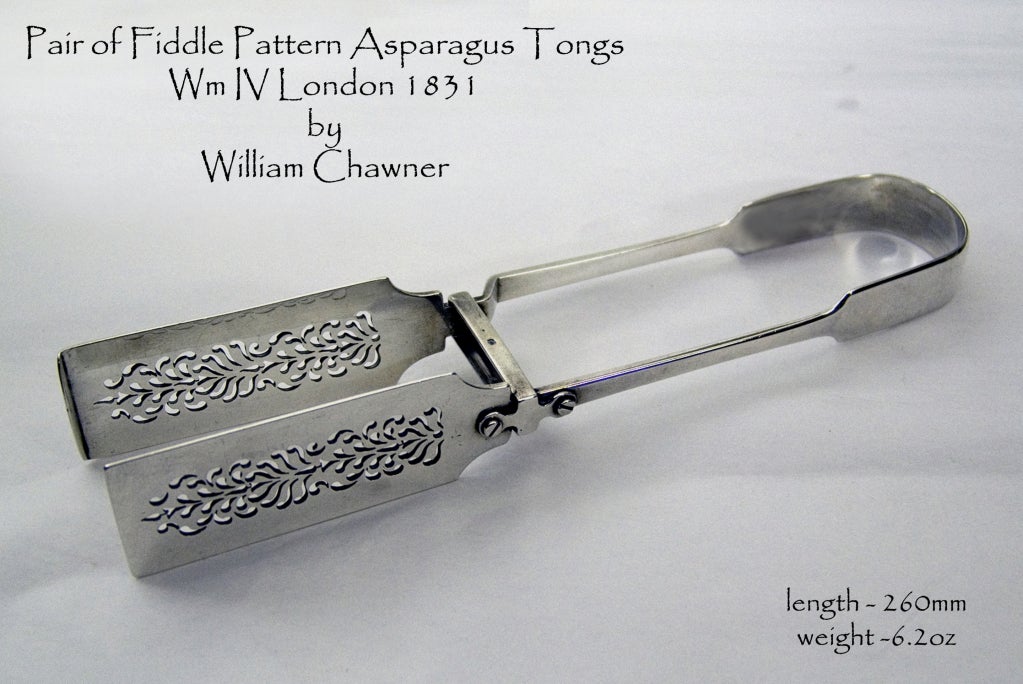 Toast is served with tongs, too. Note that, whilst metal serving tongs historically exist, because toast is generally made nowadays in an electric toaster, serving tongs for toast are nowadays made from plastic or wood for electrical safety. 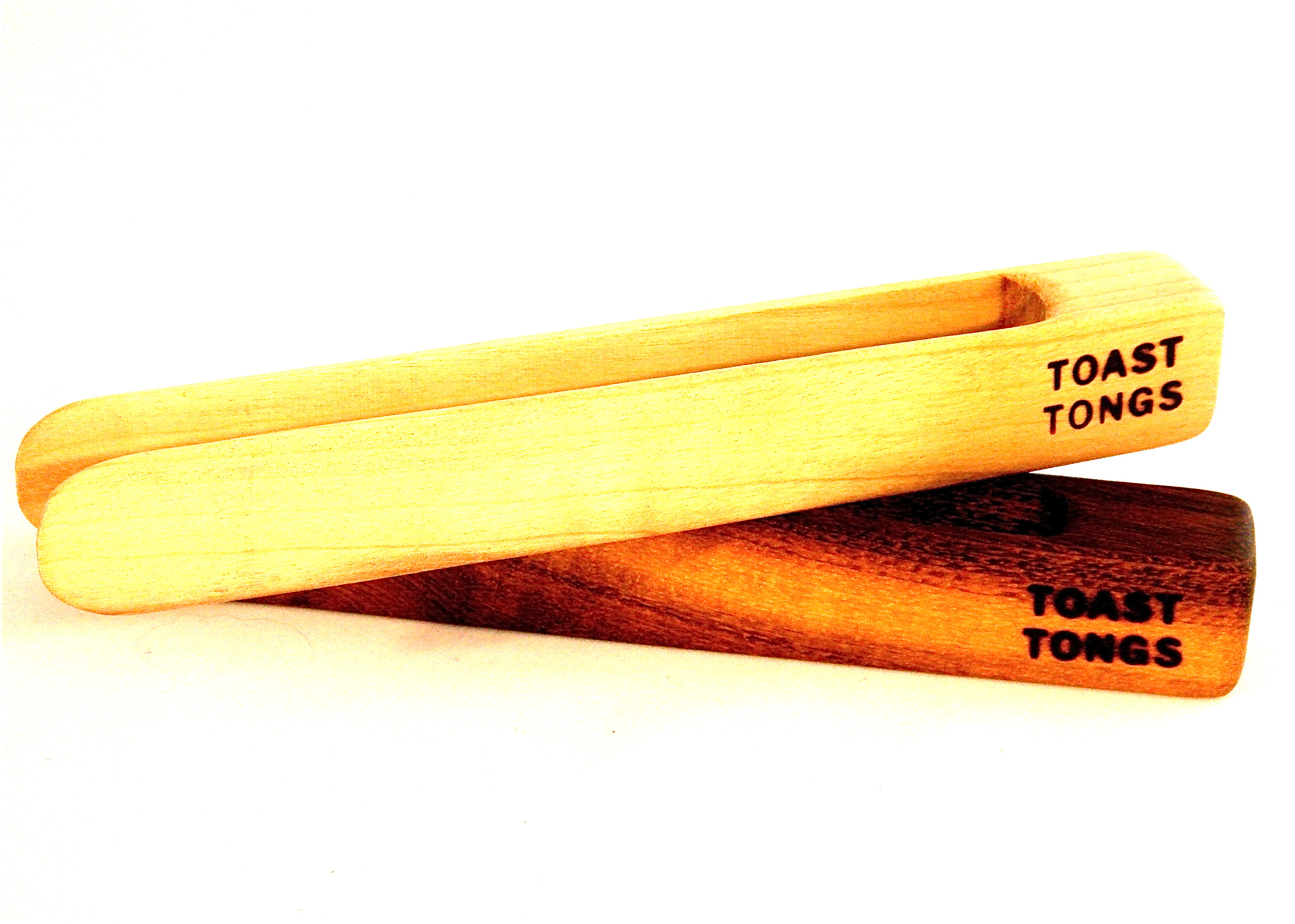 Ironically, wood would have been entirely unsuitable for the historical way of making buttered toast, which was holding it in front of a fire with a metal toasting fork.

M. Kasson (in further reading) goes into a lot of detail of the explosion of specialized flatware in the middle to late 19th century, and touches upon the notion that many of these were over-specialized by silvermongers to expand their sales catalogues.

In practice, as explained in other further reading, using the wrong tongs is not as gauche as one might think. As Mrs Hale demonstrates, in a recipe For Taking Grease out of the Leaves of Books, when one type of tongs is unavailable another sort will do, substituting hairdresser's pinching tongs for fire tongs in this particular case. (It's below a recipe for using toast for removing wax from velvet, interestingly.)

Of course, fire tongs (which are inserted into a fire, notice, rather putting the kibosh on the idea that this is unsanitary) were a regular substitute or indeed primary kitchen utensil for handling food. Emily Post described some of their uses:

A pair of long tongs is useful for arranging coals and for moving anything that is hot. They are ideal for turning corn or potatoes as they cook in the coals and better for turning a steak than a fork, which pierces the meat and allows the juices to escape.

One can find much the same advice continued today in advice to owners of barbecues:

special charcoal tongs can be bought, but a pair of standard metal tongs is sufficient

In Order of the Phoenix, Harry uses the fireplace in Umbridge's office to contact Sirius, and the experience is painful:

By extending Molly's reach, tongs helped her to avoid a similar painful posture when passing toast to Amos.

It's always been considered intimate to feed something to someone's mouth with fingers. Tools are always used except in the case of a close relationship - parent to child, child to parent, or lover to lover. Even if the food is handled with fingers in the process - such as moving it from a plate to the tongs - the intermediate step of tongs is needed to prevent either party from feeling too intimate with the other when intimacy isn't appropriate.

It's not that it's rude - it's actually the opposite, it's too intimate. The choice of tool is reasonable, as forcing her to stoop, kneel, etc would be even more distant - that of a servant, rather than a friend.

So the tongs provide a reasonable middle ground - close friend, but not intimate.

Because that's how one would normally place something somewhere in a fire, and while the author could have come up with all sorts of magical ways around it (the fire not being hot in the circumstances, Weasley being able to protect herself from the heat, directing the toast mouthward with a levitation charm) combining two normal things (putting something on a fire with fire tongs and giving someone toast) that can't normally be combined (the toast would go on fire, not to mention the diner) emphasises the magic at work more than adding more magic would, as well as being a humorous image (all the more for the childlike position of being directly fed).

The toast serves to highlight the magical setting in an amusing way, rather than moving the plot forward or giving us much in the way of exposition besides a rather peculiar piece of breakfast etiquette.

Possibly because the connection was open on both sides and Molly was cautious to enter the space that connected the Diggory's place at that moment with the Weasleys'.

What we know about floo powder and the network:

We know that it is a two-way connection - sound waves, light, carbon atoms etc. can enter both ways through this space, we don't know, however, what would happen if a wizard would target the fireplace with magical energy (i.e. levitate a piece of toast there) or partially enter it while it is occupied by another person. It is possible that such an action will cause a magical accident, even if the wizard entering in point b. is protected by a flame-freezing charm.

20
In Harry Potter, can you physically touch someone talking to you through the Floo Network?
7
Why do heads in fires look flame-colored when Floo Network fires are green?

33
Why would Mrs. Weasley believe Daily Prophet's Skeeter about Hermione?
6
Why did Mr Weasley ask Mr And Mrs Granger how bus stops work?
71
How did Molly Weasley make sauce out of nothing if Gamp's Law states that this is impossible?
3
Where would Mrs. Weasley learn the phrase “scarlet woman”?
7
Why wasn’t anyone suspicious about the Diggory’s family tree?
26
Why does Harry address the Weasley-parents with “Mr. & Mrs”?
9
Why does Mrs. Weasley always give Ron maroon clothes?