Why do heads in fires look flame-colored when Floo Network fires are green?

As can be seen in the shots below, when simply communicating through a fire, the images of the heads appear as actual flames or embers in yellow/red/orange (normal fire colors) in the fireplace:

Sirius Black (in a different movie): 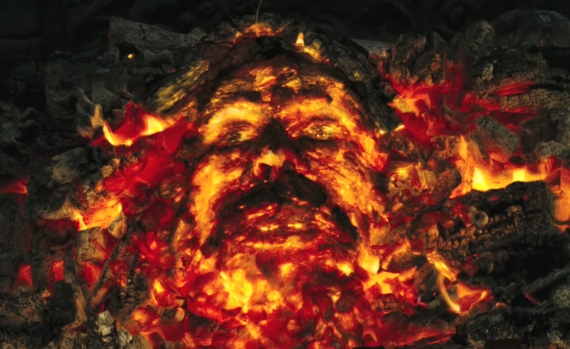 [Note: I am not asking about the difference in appearance between the normal fires. That has been answered as directorial differences in the movies.]

However, when someone travels by the Floo network, the fire appears green.

Is there a canon explanation as to why either the communication use appears as normal fire, or alternatively, that the destination fire color is unaffected by the use of Floo powder (which would effectively explain the first part)?

Green fire seems to be only for traveling by the Floo Network.

To travel by the Floo Network, Floo Powder is used, which turns the fire green and lowers their temperature to make it possible to step into the fire.

“Incendio!’ said Mr Weasley, pointing his wand at the hole in the wall behind him. Flames rose at once in the fireplace, crackling merrily as though they had been burning for hours. Mr Weasley took a small drawstring bag from his pocket, untied it, took a pinch of the powder inside and threw it onto the flames, which turned emerald green and roared higher than ever. ‘Off you go then, Fred,’ said Mr Weasley.”
- Harry Potter and the Goblet of Fire, Chapter 4 (Back to the Burrow)

When people’s heads appear in the fireplace, though, there’s no mention of the flames changing color.

“Amos Diggory’s head was sitting in the middle of the flames like a large bearded egg. It was talking very fast, completely unperturbed by the sparks flying around it and the flames licking its ears.”
- Harry Potter and the Goblet of Fire, Chapter 11 (Aboard the Hogwarts Express)

Sirius had been looking to see when he could talk to Harry, which would have been more obvious to everyone if the fire turned green when he appeared.

‘Sirius’s head?’ Hermione repeated. ‘You mean like when he wanted to talk to you during the Triwizard Tournament? But he wouldn’t do that now, it would be too – Sirius!’ She gasped, gazing at the fire; Ron dropped his quill. There in the middle of the dancing flames sat Sirius’s head, long dark hair falling around his grinning face.”
- Harry Potter and the Order of the Phoenix, Chapter 14 (Percy and Padfoot)

In addition, green fire isn’t as hot, the fire around the head still is.

“Sirius!’ he said. Harry whipped round. Sirius’s untidy dark head was sitting in the fire again.

‘Hi,’ chorused Harry, Ron and Hermione, all three kneeling down on the hearthrug. Crookshanks purred loudly and approached the fire, trying, despite the heat, to put his face close to Sirius’s.

The fire also seems to be green when the person traveling by Floo arrives in the destination fireplace.

“The Atrium was full of people; the floor was reflecting the emerald green flames that had burst into life in all the fireplaces along one wall; and streams of witches and wizards were emerging from them.”
- Harry Potter and the Order of the Phoenix, Chapter 36 (The Only One He Ever Feared)

When Dumbledore arrives by Floo, the fire he appears in is green as well.

“The empty fireplace burst into emerald green flame, making Harry leap away from the door, staring at the man spinning inside the grate. As Dumbledore’s tall form unfolded itself from the fire, the wizards and witches on the surrounding walls jerked awake, many of them giving cries of welcome. ‘Thank you,’ said Dumbledore softly.”
- Harry Potter and the Order of the Phoenix, Chapter 37 (The Lost Prophecy)

The fire is green (and not hot) for the person making the call.

We get to see the details of how making a fireplace call works when Harry attempts to call Sirius from Umbridge’s office. The person making the fireplace call uses Floo Powder, and sticks their head into the emerald green fire, but the fire on the receiving end remains hot and orange.

“Harry pulled off his Cloak and, striding over to the fireplace, found what he was looking for within seconds: a small box containing glittering Floo powder. He crouched down in front of the empty grate, his hands shaking. He had never done this before, though he thought he knew how it must work. Sticking his head into the fireplace, he took a large pinch of powder and dropped it on to the logs stacked neatly beneath him. They exploded at once into emerald green flames.

‘Number twelve, Grimmauld Place!’ Harry said loudly and clearly. It was one of the most curious sensations he had ever experienced. He had travelled by Floo powder before, of course, but then it had been his entire body that had spun around and around in the flames through the network of wizarding fireplaces that stretched over the country. This time, his knees remained firm upon the cold floor of Umbridge's office, and only his head hurtled through the emerald fire …

And then, as abruptly as it had begun, the spinning stopped. Feeling rather sick and as though he were wearing an exceptionally hot muffler around his head, Harry opened his eyes to find that he was looking up out of the kitchen fireplace at the long, wooden table, where a man sat poring over a piece of parchment.”
- Harry Potter and the Order of the Phoenix, Chapter 29 (Careers Advice)

This makes some sense - to be able to stick their head in fire, the person making the call would need to use Floo Powder so their head would be transported and not burnt.

Not the answer you're looking for? Browse other questions tagged harry-potter transportation or ask your own question.

26
Why did Mrs Weasley use tongs?

22
Why Isn't Platform 9 3/4 on the Floo Network?
14
How do people not crash into each other when using popular Floo network destinations?
8
Why didn't Harry and Co. travel to the Ministry in OotP by the floo network?
8
When did using a fireplace as a portal first become used?
12
Are muggles able to use the Floo network?
8
How does Hagrid travel?
21
Why didn't Sirius remind Harry about the mirror when he used Umbridge's fireplace?
4
Why don't Hogwarts students use fireplaces to communicate, apart from owls?
26
Why didn't Harry Potter use the Room of Requirement to secure some means of contacting Sirius Black?