In the TV show Milo Murphy's law, all members of the Murphy family have a curse: That everything that can go wrong, will go wrong.

But in the Dr. Zone Files episode, it's implied that while Milo himself has the curse, his sister, Sara, does not. This seems to be clear from Sara's multiple attempts to keep the tickets away from Milo, and her saying that she's 'been dealing with this for the past 13 years' (Milo's age).

But why wouldn't she have the curse? Isn't she a biogical Murphy? Or are my inferences wrong?

Does Sara Murphy have the family curse and if not, why not?

Sara Murphy was not cursed, as she was female

As speculated heavily by fans around the internet as to why Sara Murphy wasn't cursed. 1, 2, 3
Various conclusions have been reached, some being right guessing it's because she was female, some believed her to be adopted, a step sister, etc. Some went so far as to suggest that the clover in her hair was responsible for keeping her lucky. However, as confirmed by creator Dan Povenmire, the curse was in fact only hereditary along the male line 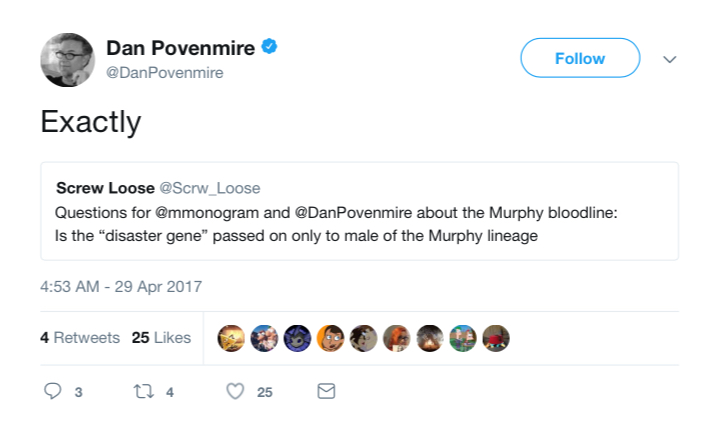 Screw Loose (@Scrw_Loose): Questions for @mmonogram and @DanPovenmire about the Murphy bloodline: Is the "disaster gene" passed on only to male of the Murphy lineage

This is reconfirmed on tumblr, by story board artist Ashley Michelle Simpson

Someone on Twitter asked about the Murphy Curse and a few others mentioned in my inbox that it was strange only Milo and his Father have the curse and not Sara.

The curse only effects the male Murphy members in the family. I know they never make it super clear in the show. Certain things some characters say tend to hint at it, but yeah, it will confuse if questions aren’t asked.

So yeah, only Murphy men are born with the curse.
Ashley Micelle Simpson confirms the curse affects males only - KicsterAsh's Tumblr

Not the answer you're looking for? Browse other questions tagged disney milo-murphys-law or ask your own question.