There's an anime I watched around 2008 on Netflix, it's similar to Pokémon, but instead of Pokéballs, the main character has a green crystal that contains a blue moose-ish looking thing, it's like a bear with red antlers and blue fur. I remember an episode where the "gem world" (inside the gems where all the monsters are) was corrupted or infected or something. The main character sent the moose (that's what I'm calling it) back to the gem world, and the moose became infected and turned evil. In the last season, there was an episode where the villain opened up a gorge. 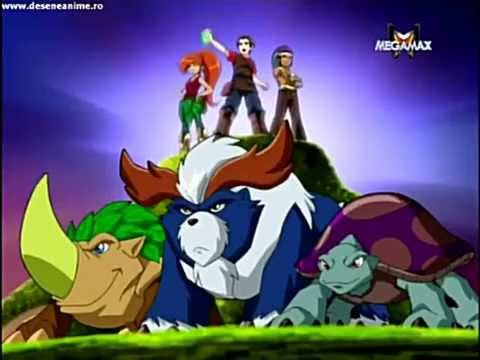 The evil Shadow Magi, Agram, was sealed in the Core through the power of the Core Glyph and the eleven Dreamstones. Three thousand years later, his power has grown and threatens to destroy the Moonlands. To combat Agram, a human boy, Tony Jones, was summoned to fulfill a prophecy of the Final Dreamer and to join Edyn and Strag on a mission to follow the Book of Elders and collect the Dreamstones.

There was even a pretty cool video game for this series that game out for the GBC.

6
Anime with gems that can summon beasts to fight for the user, one is a purple turtle
5
Monsters would turn into stone/crystals when captured

11
A cartoon/anime with a blonde-haired boy with blue eyes and his father(?), they're looking for 7 gems/diamonds
7
An anime about a boy related to gems/crystals
10
Sci-Fi/Fantasy Anime about a girl who turns into a world-destroyer
4
TV Show where monsters are cast from runes to fight one another like pokemon
6
Anime TV show with gems that summon beasts
0
Anime: main character has a gem in his head, in which an old man resides later on, who can use blood magic