This might be a serious long shot - there was a show on YTV (Canadian kids channel). It was live action, and I believe that each of the characters had a particular color, like red/yellow, that identified their vehicles. They were in space, and somehow got to the wrong side of the galaxy. While there, they met an alien on a planet. On that planet they found a pet, but the alien said that the animal was "very nutritious". The only line I remember was "Nutritious? As in, rhymes with delicious?" from one of the skeptical (presumably) human characters.

edit: I seem to remember that there was a "space gate" of some kind that they used to travel, and for some reason they couldn't get back home after they went in. There was fighting against some kind of main adversarial army/person. The pet alien thing was a sort of bald sheep.

Edit 2: it is not "space cases", although there is a similar premise. It was a lot more CGI than that, and more "military" than "school"

Is it possible it could be Hypernauts, also the answer to this question?

The premise of the series was that three cadets from the Academy of Galactic Exploration become lost in a Hyper Bubble (hyperspace) mid-jump and must band together with an alien named Kulai in order to survive in an unfamiliar part of the galaxy. Kulai (unbeknownst to the cadets) is a Chalim priestess from a planet called Pyria, a planet that was strip-mined by a warlike race called the Triiad, led by the Pyran traitor, Paiyin. The sole purpose of the Triiad is to wipe out intelligent races, and in the process acquire raw materials from their destroyed planets to continually create new war machines using automated self-replicating factory ships called "Makers."

The Hypernauts, as they name themselves, cannot match the Triiad's firepower with their own so they must rely on stealth, wits and (occasionally) their modified 'mech suits' in order to escape the Triiad. They are based in an ancient abandoned exploration ship called the Star Ranger which is hidden in an asteroid field, the Star Ranger's obsolete AI is named Horten. For long range missions they use a four-person shuttle called the Flapjack which like the Star Ranger is Hyper Bubble capable but has a much shorter range.

The Triiad have englobed the central region of the Milky Way Galaxy in a sensor net that can identify the destination point of any hyperspace jump passing out of it, so returning home would lead the Triiad directly to Earth. The Hypernauts must keep the location of Earth a secret and somehow try to warn Earth of the Triiad's existence.

Each of the characters did have a distinct color, reflected in both the highlights of their suits and of their mecha. 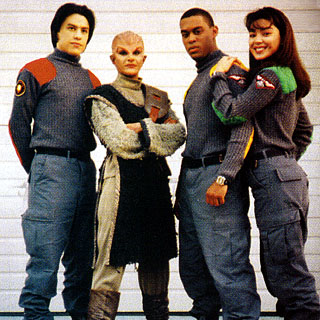 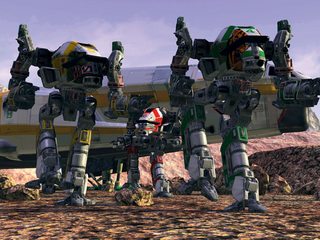 In the first episode, Max encounters the Gloose, a three legged alien, and then Paiyin and Kulai. And the dialogue does match up after they escape Paiyin, and the Gloose escapes them.

Kulai: It's a pity. Roasted Gloose is delicious.
Max: Did she say delicious?
Sharkey: Rhymes with... nutritious?

Here's the intro in case it might be more identifiable:

This sounds like "Space Cases" a Canadian show from 1996-97, that also aired on Nickelodeon in the US, about a group of students at a space academy orbiting Pluto that get stranded on the other side of the galaxy after sneaking aboard a mysterious alien ship.

Space Cases is a Canadian science fiction television series that aired on Nickelodeon for two seasons. ... The show's premise revolves around a group of misfit students and two adults who are stranded far from home aboard an alien ship. Their attempts at journeying back see many dangerous adventures and controversies, with some occasionally more mature themes.

As for finding a pet on a planet that the aliens want to eat, that sounds like episode 2 of Season 2 of the series:

Episode 15 "The Sporting Kind": Rosie finds a new pet, but Spung are hunting for it and aren't happy about losing their prey.