I can't remember much about it as a kid, but I do remember the toys and its really bugging me.

I only remember that it was live action, about this teenage boy and girl who where stuck on another world (kind of icy or at least there were icy worlds) and the guy can somehow change his limbs to be mechanical. There was a scene where the girl is being taken by the lead villain and as he reaches out for her, his arm transforms into a spring like arm that springs forwards and saves her to his suprise.

There was also a silver C-3PO-looking robot and a giant bird-like creature (I think) as their allies in a pod like spaceship.

There was once en episode where the pod could only use its legs for some reason and had to walk instead of fly.

The toys were really cool and easily available in the UK, and you could detach all the limbs to mix and match different characters since that's what the characters do in the show. Kind of Like LEGO but proper figures.

You are most likely looking for Galidor: Defenders of the Outer Dimension.

It has all of the elements you specified. The show aired on Fox Kids (before they changed their name) during the Saturday morning cartoon schedule. 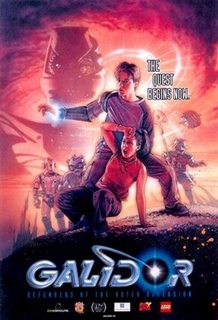 8
What early-2000s show about dimension hopping has a character who can swap limbs?

11
Looking for a TV show about young people at a boarding school?
3
looking for a sci fi cartoon (american) from late 80s early 90s
18
Looking for a book series about a girl and her friends captured and sold as slaves
8
Looking for a CGI slideshow(?)/TV show broadcast between '99 and ~'07
9
Show about 5 teens who all have elemental powers and turn into different humanoid creatures
4
Early 2000's live action show about teenager who gets sent to a futuristic dystopian-type world and gets a robotic arm
2
Cartoon about 2 guys (one named Sam) and a girl
4
2000 tv show about a parallel universe or game
3
Looking for a book that is sci-fi/thriller maybe about a robot girl?