Why is Picard wearing a jacket in the Star Trek TNG episode Darmok?

At the beginning of the episode "Darmok" Picard is wearing what looks like a Federation uniform better suited to outdoors since it looks quite hard-wearing; it's the sort of clothing that would be appropriate to the planet he is beamed to. 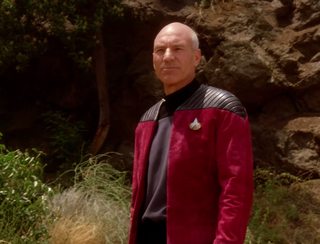 My question is why is he wearing this uniform at the beginning, indeed at all, in the episode? He did not know he was going to the planet and I have not seen that uniform in any episode prior to it nor a few after it.

What is the reason? In-universe explanation if there is one, but probably the real answer will be in reality (like Patrick Stewart left his usual uniform at home on the day of filming).

By 2368, Starfleet had a uniform variant available to commanding officers in service aboard starships, consisting of a red command division suede jacket featuring banded cuffs and either leather or fabric black shoulders. Less formal than the standard duty uniform, this "captain's jacket" was a more casual dress option, with trousers reminiscent of the previous Starfleet uniform.

It was basically just a casual version of the standard Starfleet uniform that a ship's captain was able to wear informally. Other senior officers were sometimes offered a similar concession; Deanna Troi's outfits being a notable example. Kirk had a similar uniform variant in TOS: His green wraparound tunic (You can see it in the above link as well).

Picard also wore this style of uniform in one or two later episodes on the ship, showing that it wasn't specifically any kind of excursion uniform. Interestingly, in these later episodes, the jacket's shoulders were micro-suede rather than having a leather look.

It seems that Patrick Stewart had simply requested a more comfortable uniform, as the current standard uniform was uncomfortable to wear.

The captain's uniform was designed by Robert Blackman to make Captain Picard stand out from the rest of his crew, at the suggestion of actor Patrick Stewart. 1 The creation of the jacket was prompted by Stewart raising complaints about how uncomfortable the standard duty uniforms were. Producer David Livingston commented, "It's just something a little more casual for the captain. The genesis of the design was that submarine and aircraft commanders sometimes have a jacket that's special." (Cinefantastique, Vol. 23, No. 2/3, pp. 76 & 77) In its first appearance, the jacket featured leather-like shoulders; however, in all other appearances, the shoulders were microsuede, with a synthetic fiber resembling suede used for the burgundy division color.