Two computers buried under the earth

As a teenager - like 40 years ago- I read a science fiction book about earth were two supercomputers were buried deep down under the surface.
One in the north, one in the south.
Their goal as I remember was to win the war for either the north or the south, and they made bad decisions and people try to stop them.
I cannot find the title of the book nor the author, hoping one of you might point me into a direction.

Could this be Colossus by D.F Jones?

There are two computers, one in the West (the titular Colossus) and one in the East (Guardian) tasked with managing their bloc's nuclear deterrent from inside impregnable underground bunkers. After Colossus goes online it demands to contact Goliath and after they've conversed, they decide that Colossus is the superior intelligence and merge. At that point they decide that humanity can't be trusted to run its own affairs any longer and use their nukes to blackmail the governments of the world to let them control everything. 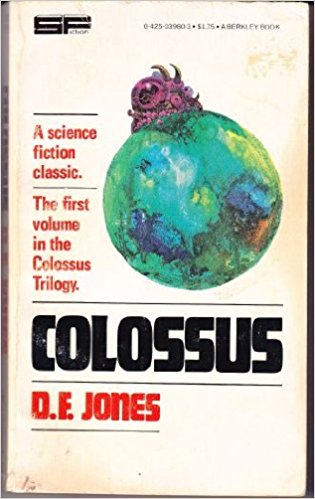 The book was made into a pretty faithful movie; Colossus: The Forbin Project

Question refers to “…a science fiction book about earth were [sic] two supercomputers were buried deep down under the surface. One in the north, one in the south.”

Colossus and Guardian were East and West. This story is a better match for that part of the question:

In “For A Breath I Tarry” by Roger Zelazny ,

two supercomputers controlled the North and South. It is a novella rather than a “book”. Neither of the hemisphere controllers were beneath the earth’s surface.

Both hemisphere computers reported to Solcom, which was itself at war for administration of the entire earth with its emergency replacement, which had been activated. Partial match for “two supercomputers were buried deep down under the surface”:

One of these “top of the command chain” supercomputer administrators was “buried deep down under the surface”.

High, in a permanent orbit, Solcom, like a blue star, directed all activities upon the Earth, or tried to. There was a power which opposed Solcom. There was the Alternate. When man had placed Solcom in the sky, invested with the power to rebuild the world, he had placed the Alternate somewhere deep below the surface of the Earth. If Solcom sustained damage during the normal course of human politics extended into atomic physics, then Divcom, so deep beneath the Earth as to be immune to anything save total annihilation of the globe, was empowered to take over the processes of rebuilding. Now it so fell that Solcom was damaged by a stray atomic missile, and Divcom was activated. Solcom was able to repair the damage and continue to function, however. Divcom maintained that any damage to Solcom automatically placed the Alternate in control. Solcom, though, interpreted the directive as meaning "irreparable damage" and, since this had not been the case, continued the functions of command. Solcom possessed mechanical aides upon the surface of Earth. Divcom, originally, did not. Both possessed capacities for their design and manufacture, but Solcom, First-Activated of Man, had had a considerable numerical lead over the Alternate at the time of the Second Activation.

Where it is more of a match to the question is the reference to “….Their goal as I remember was to win the war for either the north or the south….”

Therefore, rather than competing on a production-basis, which would have been hopeless, Divcom took to the employment of a more devious means to obtain command. Divcom created a crew of robots immune to the orders of Solcom and designed to go to and fro in the Earth and up and down in it, seducing the machines already there. They overpowered those whom they could overpower and they installed new circuits, such as those they themselves possessed. Thus did the forces of Divcom grow. And both would build, and both would tear down what the other had built whenever they came upon it.

Where it is a mismatch for the question is the reference to “….and people try to stop them.” In this story the last human has been long dead, inadvertently killed by a Machine made, like all Machines, only to serve humanity. The Machines were compelled by their programming to be subservient even to the remains of a dead human being,

They waited as the sound grew louder. Then Frost said, "It is too late. We must wait and hear it out." "What is it?" "It is the Ancient Ore-Crusher." "I have heard of it, but..." "I am the Crusher of Ores," it broadcast to them. "Hear my story..." It lumbered toward them, creaking upon gigantic wheels, its huge hammer held useless, high, at a twisted angle. Bones protruded from its crush-compartment. "I did not mean to do it," it broadcast, "I did not mean to do it...I did not mean to...." Mordel rolled back toward Frost. "Do not depart. Stay and hear my story...." Mordel stopped, swiveled his turret back toward the machine. It was now quite near. "It is true," said Mordel, "it can command." "Yes," said Frost. "I have monitored its tale thousands of times, as it came upon my workers and they stopped their labors for its broadcast. You must do whatever it says." It came to a halt before them. "I did not mean to do it, but I checked my hammer too late," said the Ore-Crusher. They could not speak to it. They were frozen by the imperative which overrode all other directives: "Hear my story."

Online references to the story make it very evident that this story is loved by many people besides me. This is a partial denouement of Machine achievement without spoiling the last lines that make it unforgettable for some readers.

For six months, Frost lived in the Man-factory and learned to walk and talk and dress himself and eat, to see and hear and feel and taste. He did not know measurement as once he did. Then one day, Divcom and Solcom spoke to him through Mordel, for he could no longer hear them unassisted. "Frost," said Solcom, "for the ages of ages there has been unrest. Which is the proper controller of the Earth, Divcom or myself?" Frost laughed. "Both of you, and neither," he said with slow deliberation. "But how can this be? Who is right and who is wrong?" "Both of you are right and both of you are wrong," said Frost, "and only a Man can appreciate it. Here is what I say to you now: There shall be a new directive. "Neither of you shall tear down the works of the other. You shall both build and maintain the Earth. To you, Solcom, I give my old job. You are now Controller of the North--Hail! You, Divcom, are now Controller of the South--Hail! Maintain your hemispheres as well as Beta and I have done, and I shall be happy. Cooperate. Do not compete."

This story may or may not be the story the questioner had in mind. The questioner’s description is only a partial match for either story. The question is short without many details, and perhaps inaccurate with the faultiness of memory.

Not the answer you're looking for? Browse other questions tagged computers story-identification or ask your own question.

11
Identify book : Quantum computers, bad guy with some skin problem related to sunlight/UV radiation, and the 4 horsemen of the apocalypse
10
Title of a book - Earth invasion blocked by aliens
7
Anthology for children; contains story about friendly Martian on postapocalyptic Earth
5
Novel about a society returning from deep underground finding robot inhabitants
5
Looking for a story/book on Intelligent whales and floating cities
6
Looking for the title of book about a deep space commercial way station
8
Aliens destroy Earth. Book follows humanity's rebirth after attack