How was the Resistance able to rescue this character?

In The Last Jedi, after the opening battle, the Resistance makes a jump to hyperspace. Shortly after exiting hyperspace (Spoilers follow),

it is discovered that the First Order has somehow followed them, and another brief battle ensues. This results the Raddus's bridge being destroyed, with many of the highest ranking leaders being blown out into space, killing all but one of them: General Leia. She is able to use the Force to pull herself back to the ship, where she is able to re-enter the bridge and approaches a sealed door. Here, we see that Poe, Finn, and Lieutenant Connix saw her coming, and they opened the door to let her in.

How were they able to open the door without being blown out into space?

In the official novelisation it's explicitly stated that she entered an airlock. She then used the Force to close the outer door and the crew then opened the inner door.

Even as her senses dimmed, her body rose toward the gaping maw of the shattered bridge. It slid through the wreckage and into the lock. Leia’s fingers brushed the viewport, and the outer hatch closed.

Then the inner door opened, flooding the narrow space with light and air and life. Faintly, as if from a great distance, she heard contradictory commands and agonized questions surrounding her. The Force was bright and spiky with fear. 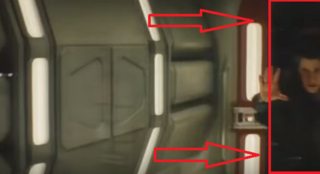 A related answer is here. Most starship hangars in the films are open to vacuum, and covered by magnetic shields or force fields.

This isn't a definitive canon answer, but it seems reasonable to speculate that sort of shielding might be used in a reactive way in damage control. The last answer at that link (by Darth revan) references the game Old Republic and states that containment fields were effective against small breaches.

15
How do the Death Stars retain atmosphere in the landing bays?