Short story about scientists that stumble across an FTL drive

I'm looking for a short story that was published in Analog in the late 60s/early 70s. It deals with a group of scientists that are examining the remains of an alien craft that was shot up in space. They try to figure up which parts go where and what a series of enormous circuit buses do. Eventually they think the have discovered what seems to be a working FTL/hyperspace drive. The tests work and the drive is a success. Later they discover that the ship just had an ordinary drive and they made the wrong assumptions.

The short story “Dead End” by Mike Hodous was published in Analog in May 1967, ISFDb title, and deals with an attempt to give the aliens the chance to make the same mistake they did. Artwork for both stories was by Frank Kelly Freas, I believe.

That sounds very much like a story "Persistence" by Joe Martino in the May 1969 Analog. Commander William Marshall is studying a captured Arcani (the aliens) ship. His bosses are convinced that they have an FTL communicator (not a drive -- both sides have that) and want his team to find it. He finds some useful new technology, but no FTL communicator. But he's persistent, and eventually figures out how to use some bits of tech from the alien craft along with some human tech to build one. So if it could be a communicator and not a drive, that's it. (It's an old favorite of mine -- one of the very best of the type sometimes brushed aside as "An Analog story".) 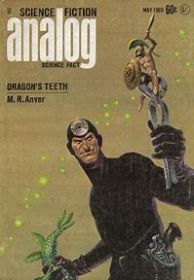 (The cover (above) is for another story, but the interior illos for "Persistence" are by Freas.)

Not the answer you're looking for? Browse other questions tagged story-identification short-stories ftl-drive or ask your own question.