Identify this Transformer with wings and tank treads / caterpillar tracks

I originally saw this in a Transformers Colouring Book1 but I cannot identify him. He apparently has caterpillar tracks on his arms, so I'm guessing he changes into a tank. And it looks like he has wings on his legs.

I'm pretty sure he is not one of the many incarnations of these jet / tank characters:

This image does not show any allegiance badge so we cannot see if he is an Autobot or a Decepticon.

1 Unfortunately this book contained Transformers from multiple universes so I could not easily identify this one.

This is a piece of fanart by Hervé Creach, posted to his DeviantArt account. It is meant to be the character Springer, as he would appear in the War Within setting. However, Creach's design differs significantly from the design for Springer seen in the actual War Within comics, such as here on the cover of The War Within: The Dark Ages issue #2: 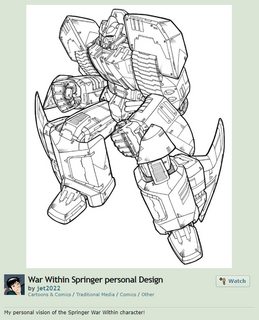 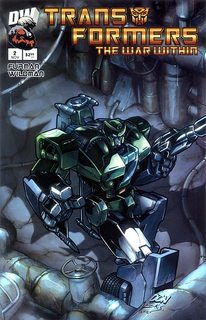 Given that this is not official art, and that the coloring book containing the image was released through Amazon's CreateSpace print-on-demand publishing platform, it seems likely that the coloring book is an unlicensed publication, potentially violating the copyrights of the artists whose work is included in it as well as Hasbro's trademarks relating to the Transformers intellectual property.

After searching for items on the Transformer wiki that included mention of tank treads, I think there's a possibility this is supposed to be Sixshot. 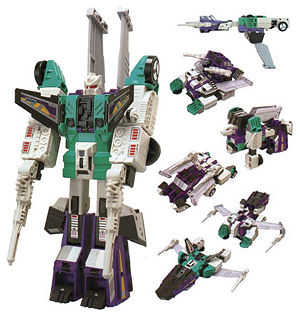 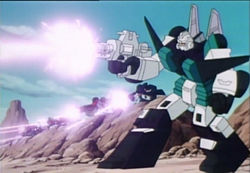 On the toy, you can see the tank treads on the arms, as well as wings on the legs and arms. The general shape of the head and body is right. As regards the other bits not fitting, the toy had a lot of detachable "kibble" to justify the six different forms.

Few Decepticons are as feared as Sixshot (aka Six Shot), either by the Autobots or by their own comrades. As the first Transformer Six Changer, able to assume six different modes, he is officially designated as a "Solo Transformer Assault Group" (or "S.T.A.G."), but is more colloquially known among those who know and fear him as a "one-robot army". Sixshot's destructive ability is the stuff of legend, a gleeful murderousness that is matched in ferocity only by the intensity with which he sets to the bloody tasks given him. He is not to be mistaken for a mindless weapon, however—he is highly intelligent, and not without honor of a warped sort. He grants due respect to any opponent he deems worthy, and always speaks well of them after he has inevitably dispatched them to, as he puts it, "the great junkyard in the sky".

These attitudes are reflective of Sixshot's understanding of the inevitable end that waits for a warrior such as he, and the hope that when his own end eventually arrives he will be remembered in the same way. But that end will be long in coming, for although Sixshot believes that life is only worth living for as long as there are opponents who can challenge him, his mantra does not preclude his own allegiance changing in order to make new enemies and challenges where none existed before.

Not the answer you're looking for? Browse other questions tagged character-identification transformers or ask your own question.