Why did the Enterprise not have any HAZMAT suits?

The USS Enterprise is a huge ship. Some incredibly deadly gases, emissions, etc. are on board the ship at all times in respective areas safely stored and monitored of course.

After the second battle with Khan, Mr. Scott tells Admiral Kirk that he's had to take the mains offline due to radiation.

Khan starts the Genesis device and the Enterprise can barely limp away from Reliant due to warp drive being offline.

Mr. Spock overhears this and takes it upon himself to repair the damage dying as a result. Needs of the many and so on.

Did no engineer think to bring a HAZMAT suit or two?

I don't buy the answers "It was a training mission and they had no time to bring any." Or "The radiation was far too deadly even for the best HAZMATs." Or even, "All the engineers were killed during the two space battles." Or "Spock is only half human and thought he could tolerate more radiation."

They did have radiation/hazmat outfits available in engineering, somewhat nebulously referred to as engineering suits. You see them on several occasions during the TOS films.

The engineering suit was a slightly modified version of the suit introduced earlier in the 2270s in order to protect engineering personnel while servicing the warp and impulse engines, as well as performing other tasks where they may be exposed to radiation. (Memory Alpha/Starfleet Uniform (late 2270s-2350s)

The reason Spock didn't wear one is that there wasn't time to put it on. Instead, he took the gloves from one such suit to provide some semblance of protection for his hands while making his adjustments.

Spock arrives in the engine room, only to be blocked by Dr. McCoy from entering the lethally irradiated dilithium reactor room. After first feigning compliance, an apologetic Spock nerve pinches McCoy and mind melds with the doctor, simply saying "Remember..." He then dons Scott's radiation suit gloves, enters the chamber, and endures the life threatening radiation while repairing the main reactor. McCoy and Scott yell at Spock to get out immediately, but he continues to work, ignoring their pleas. (Memory Alpha/Star Trek II)

Let's not forget the hazmat suits worn by Spock and LTJG Tormolen on Psi 2000. 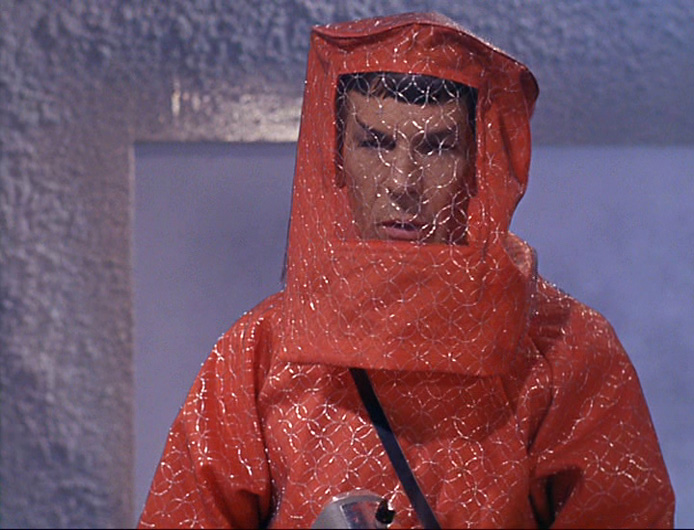 What the suit lacks in protection is more then offset by styling.

I don't know of anything in universe that would be able to do any different.

We also know, from TOS itself (The Tholian Web), that the Enterprise had environmental(EVA) suits, which could easily double for HAZMAT (in fact, an EVA suit would be superior since HAZMATs are not always pressure sealed). Presumably these are not stored in Engineering or Spock would have surely grabbed one. 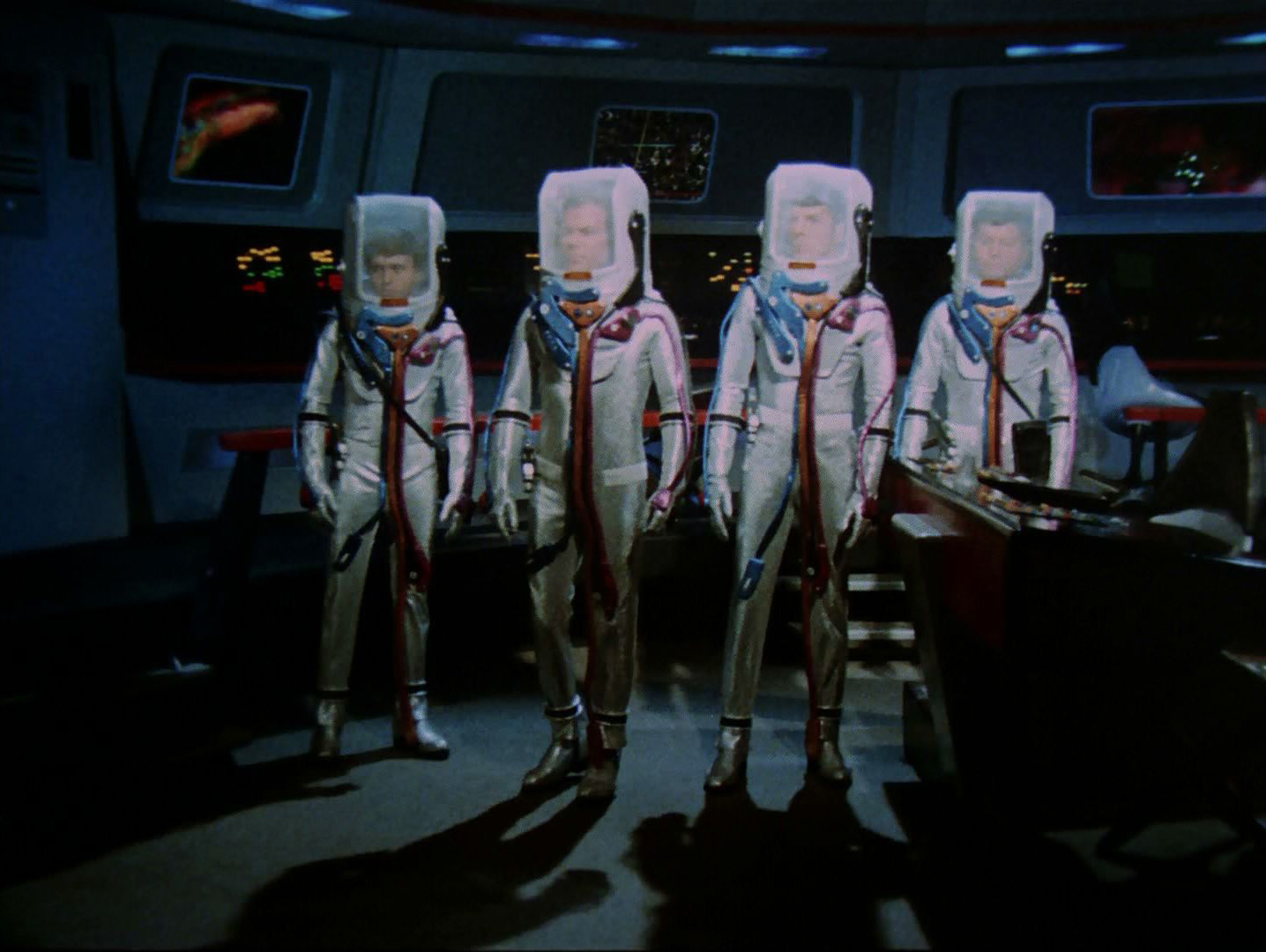 Another point not mentioned is that Khan's initial attack killed a lot of the Engineering crew (including Scott's nephew), who were all wearing radiation suits. So there may not have been any spares for Spock to grab either.

Considering how quickly Spock received a lethal dose of radiation, and that it had already been established that no human could have survived even that long, it seems unlikely that a hazmat suit would have helped.

Hazmat suits protect the wearer from physical contact with hazardous materials, and usually offer some additional features such as air filtration. However, many types of radiation can pass through such suits. If that kind of radiation was the threat, then wearing a hazmat suit would have only impeded Spock's efforts to save the ship.

The gloves seem to have been necessary due to temperature or some kind of gas that can be seen in the chamber, but it's likely that the full suit would not have offered any meaningful protection.

Not the answer you're looking for? Browse other questions tagged star-trek the-wrath-of-khan or ask your own question.

29
Why was Admiral "Dr." McCoy inspecting Enterprise-D?
5
Why did Khan decide to chase the Enterprise into the Mutara Nebula in Star Trek II?
18
The ultimate fate and influence of the HMS Bounty
22
How did the Enterprise lower the Reliant's shields in Wrath of Khan?
13
What did Enterprise do while the away team was underground on Regula?
4
How old was Peter Preston when he entered Starfleet Academy?
13
Could Khan have used the Enterprise's prefix codes to lower its shields?
22
Why didn’t Lt. Saavik tell Kirk to bring Spock's body to Vulcan instead of leaving it on Genesis?
5
Why did James Kirk and the Enterprise return to Planet Genesis so soon?
50
Why does the Enterprise not have any physical access controls?