YA book about brother and sister in virtual reality

I remember reading a YA book about 10-15 years ago about a brother and sister playing a VR game. I think the brother started first and needed help from the sister but it could have been the other way around.

I remember it being very detailed but I can't remember the title, I have an idea that the cover might have featured a tree or jungle of some kind but I'm not certain and it could have had different covers from different publications.

I did a little light google searching and ran across A Race Against Time: A Novel. It is part of a series with cover art resembling a part of a tree. 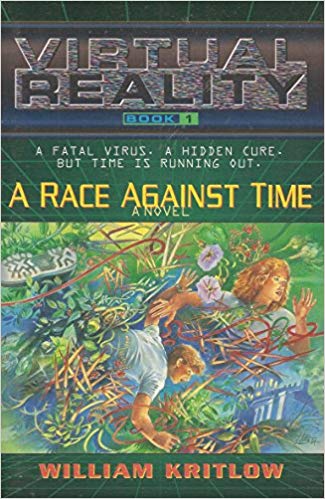 In this first book in the Virtual Reality series, a brilliant scientist experimenting with recombinant DNA develops a deadly virus and accidentally infects himself and several others. Before falling into a coma, he informs his brother that the formula--and the cure--are hidden inside a virtual-reality computer program. The brother contrives to blackmail the world by threatening to release the virus and then sell the cure. First, however, he must find the formula. Morty Craft, a retired FBI computer specialist, is hired to solve the mystery of the deadly outbreak of disease. Aided by his teenage niece and nephew, he explores the quirky computer world to find the formula before the evil brother does. By overcoming a series of obstacles designed to test one's spiritual resolve, the trio finds the formula, just in time. Despite the lackluster title and the moralizing tag-on about "True Reality" versus virtual reality, this is fascinating fare for young computer literates. Shelley Townsend-Hudson