Ok, so this is a total shot in the dark, but here goes...

When I was in 4th grade (around 1982) there was a series of sci-fi books for kids or teens in the library at school. All I can remember about them is that they were smaller hardcover books (bigger than paperbacks, but not too much - similar to those Golden books in size), and all black. One was about the moon- a moon base I think. I don't believe they were movie novelizations though.

And that's really all I got! I know it's not much to go on, but does it ring any bells for anyone? I've been hunting online for years with no luck.

Could these have been Tom Swift, Jr. books by Victor Appleton II? For example, Tom Swift in the Race to the Moon had a black dust jacket. 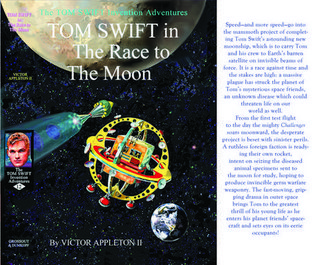 The books were also available without dust jackets. Those versions had a yellow spine and back cover. Those with dust jackets were blue underneath the dust jacket. The Hardy Boys and Nancy Drew books looked similar in format, as they were from the same publisher.

That was the twelfth of thirty-three books. They could easily have had another book set in a moonbase. It seems to me that they established one after this book, perhaps in Tom Swift and His Space Solartron, the thirteenth book. That seems to have also been available in a black cover like 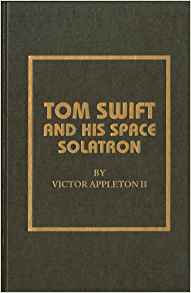 20
Futuristic reading devices story from 1970's/1980's
6
Can someone help me find an early 1980 SciFi Cat space adventure story I read in the mid '80's?
6
What was that book about a Martian invasion that's wiped out by one scientist's invention?
9
Identifying a “finding Earth” series of SciFi novels