Book name for Epic novel about colonizing a large planet

I'm trying to remember the name of a book I read in the early to mid-90's. It was an epic novel about a group of human colonizing an Earth-like planet that is much larger than Earth. There were several plots running simultaneously through the book. One I remember in particular was a husband and wife exploring a part of the planet only to have her die in an accident. The husband is able to transfer her consciousness to a robot that looks like her. There was another subplot that involved training sea creatures to dive for rocks in the depths of a giant ocean. Yet another subplot of spaceship pilot being captured by an alien entity that enslave him by connecting his limbs to a device that harnesses his movement for energy. I have a vague recollection that this was the first book in a series, but I only read the one book and can't remember the title for the life of me. Any help is appreciated.

Additional Info If it helps, I remember part of the sub-plot of the husband bringing the wife back to life as an android that she is initially aghast by her new body but then grows more used to the idea and starts theorizing ways to add padding in certain areas to make her new body softer and more feminine.

Some of these points — the colonization of a planet much larger than Earth, and the existence of several subplots — remind me of America 2040 (1986), the first in a series of five novels by Evan Innes (Hugh Zachary): 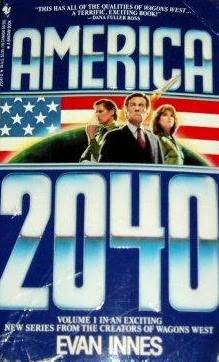 One member of the colonization ship's crew is an android (male in appearance), so the technology exists for a realistic android body as you described for the woman who died.

I think I still have the novel. I'll check the other details if I can find it.

I remember that the element rhenium was a critical component of the ship's drive.

Not the answer you're looking for? Browse other questions tagged story-identification space-colonization or ask your own question.

7
Sci Fi book about colonizing dinosaur planet
6
Looking for a book — purple grass on an “alien” planet
7
Kindle book about a woman who helps remove ghosts from houses
24
Science Fiction novel or novels about starship that becomes a god, colonizes hostile planet
10
Trying to remember the name of a book I read in the 90s
7
Fantasy book series about persecuted people with elemental magic powers
10
Old short story, same personalities, differing planes of existence