This question was triggered by this section of DVK's answer on Is Viktor Krum a good wizard? :

Hermione liked him enough to actually go out with him somewhat seriously. Since this is NOT a Hollywood romantic comedy, I'm going to make an assumption that Hermione's personality is that of a typical nerdy know-it-all girl; and nearly 100% of those that I have known (and I've known plenty) were almost exclusively into guys who had intelligence.

To which I commented that she end up with Ron Weasley. DVK replied with this:

Ron is the best Wizard Chess player in the entire series. Just because he was a lazy student, don't make him not intelligent.

I remember him playing chess only in the first book, but I don't remember him showing smartness anytime after that, did he?

Not only was he one of the greatest wizarding chess player in the series but he also finds Harry and Hermione when he figures out how to use the deluminator. He has street smarts, in a similar way to his elder brothers Fred and George.

Despite being a "Lazy" student, Ron was fairy competent at his school work, at least in regards to his testing. Which, unlike Muggle tests, had practical portions to prove they actually could do spells, etc. and not just memorize answers for a paper test. 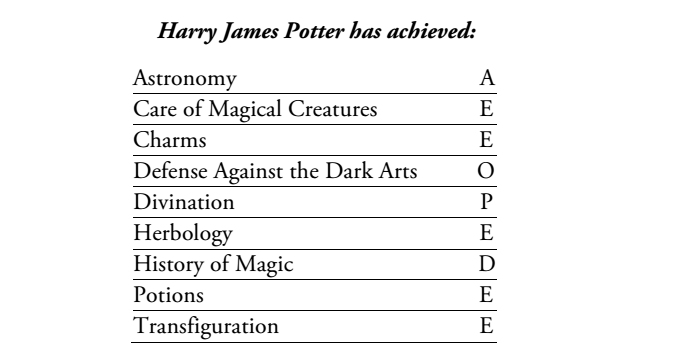 These are Harry's scores, but we know that Ron got similar scores:

He looked around. Hermione had her back to him and her head bent, but Ron was looking delighted.
“Only failed Divination and History of Magic, and who cares about them?” he said happily to Harry. “Here — swap —”
Harry glanced down Ron’s grades: There were no “Outstandings” there. . . .

Other than Defense Against the Dark Arts, I'd hazard a guess that Ron's scores are identical to Harry's.

Ron got an E in Transfiguration:

And I ought to tell you now, Potter, that I do not accept students into my N.E.W.T. classes unless they have achieved ‘Exceeds Expectations’ or higher at Ordinary Wizarding Level.

Also an E in Potions.

“And so you did when Professor Snape was teaching the subject. Professor Slughorn, however, is perfectly happy to accept N.E.W.T students with ‘Exceeds Expectations’ at O.W.L. Do you wish to proceed with Potions?”

We also know that later in life Ron became an Auror, which was a task only given only to the elite, in both intelligence and skill.

In the last couple of books he is continually having ideas and providing observations which Hermione describes as 'brilliant'.

Ron seems to not be academically strong as that does not interest him but he is intelligent when he actually thinks about things.

Hermione might well have sensed that and found it attractive even if that frustrated and confused her because he did not 'seem' her (or anyone's!!) type.

Well, let's look at it this way: Is magic, and being good at it, biased around intelligence? Hermione is clearly smart, and though spellcraft in Harry Potter seems very reliant on brute force memorization (aptitude for which does not necessarily make one intelligent!) I think we can all agree that it does seem to be learned similar to the way one learns any cerebral task, (mathematics, programming, writing, etc) by careful practice and forethought.

Because Ron is good at magic. He may not be better than Harry or Hermione, but by sixteen he was able to duel adult wizards and do fairly well for himself. By seventeen, he was winning fights against fully grown adults. If magic is biased on intelligence, then Ron must be pretty decent. He had a large amount of abnormal practice, but he didn't die during it, which leads to the conclusion that he was doing something right.

In the books we see several instances where Ron's intelligence shows:

J.K. Rowling described Ron as “not the most intelligent”.

When J.K. Rowling answered why Dumbledore gave Ron the Deluminator, she described Ron as not the most skilled or intelligent when explaining his role in the trio.

Sampotterish: Why did dumbledore want ron to keep his deluminator

J.K. Rowling: Because he knew that Ron might need a little more guidance than the other two.

J.K. Rowling: Dumbledore understood Ron's importance in the trio. He wasn't the most skilled, or the most intelligent, but he held them together; his humour and his good heart were essential.
- Bloomsbury Live Chat, (July 30, 2007)

Whether she meant that’s he’s not the most intelligent just out of of the three of them or more generally isn’t clear - but she doesn’t seem to consider Ron particularly smart.

Ron did a non-verbal spell when he was 12 years old. He nearly died to make sure that Harry got the Philosphers Stone. He defended Harry countless times. Need I say more?

Not the answer you're looking for? Browse other questions tagged harry-potter ron-weasley or ask your own question.

13
Is Viktor Krum a good wizard?

37
Why was Ron so nasty to Hermione?
17
How did Ron Weasley have money to spend in Hogsmeade?
24
Did Ron Weasley have some sort of seer blood or prophetic powers?
8
Why does Mrs. Weasley always give Ron maroon clothes?
1
Is Ron Weasley the master of Bellatrix Lestrange's first wand?
11
Why didn't Hermione hug Ron Weasley in this scene?