How can The Flash carry multiple people at once?

In season 3 in the episode with the gorilla city I'm pretty sure The Flash carries a whole bunch of people at once. We see one bundle of red flashes flowing though the forest and at the end suddenly releasing a flash and 3 or 4 of his companions. If he carried them one by one, we should have seen the bundle of flashes move back and forth several times (once for each person) releasing one at a time.

Also at least in the TV series The Flash does not seem to have special superhuman strength. I can't remember him doing anything like lift or throw heavy objects a normal human could not lift or throw. Hitting someone with super-speed (and heavy impact) is a side effect of his speed ability.

And even if he had superhuman strength, how could he carry more than 2 people (one under each arm) at once?

Was this a writers mistake? Or is it canon that the TV flash has superhuman strength and can carry multiple people at once?

In the comics, at least, the Flash has been seen on occasion pulling other people along in his slipstream. While I think he's done this more often as a way to deliver multiple criminals to jail, he's also done it to transport civilians, as seen in The Flash 208, from August 1971: 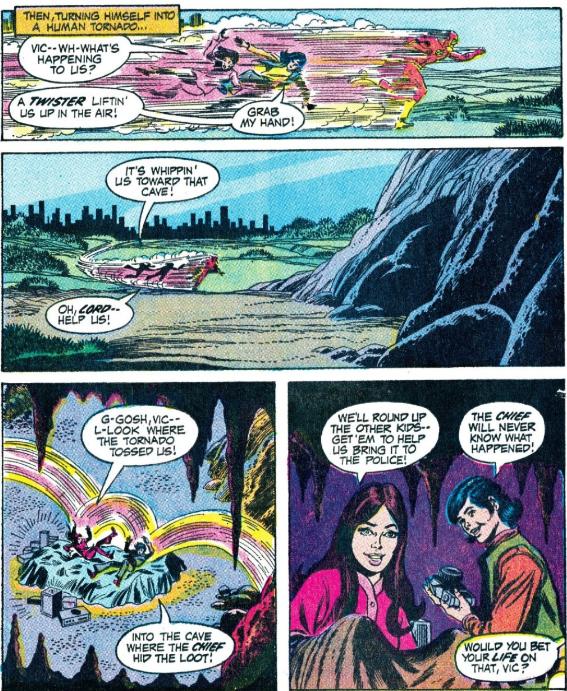 (He refers to it as turning into a human twister, but the image definitely shows people simply pulled along in his wake).

I don't think I've seen that in the show (note that I've only watched through season 2, to date). I seem to recall at least one incident during season 2 where we explicitly see the Flash evacuating people one by one, as they start appearing in a parking lot, dropped off by a red blur. I definitely haven't seen the episode, so I'm not sure if that's a possibility based on what's seen.

One of the powers that Wally West has had in the comics is to "loan" and "borrow" kinetic energy to objects. If we assume that TV Barry has a similar power, he could touch a person or object, instantaneously "accelerating" them up to his speed. At that point, inertia would keep the item(s) moving, with only a slight amount of muscle needed to keep them under control. If he didn't have such a power, attempting to pick up anything at rest is he's traveling at speed would result in his arms being pulled off.

4
How can the Flash stay on the ground?
4
Can The Flash turn off his powers?
8
Can Reverse Flash kill Flash?
0
Why did future Flash save his child-self from Reverse Flash only once?
4
Why is everyone running in circles?
8
Captain Cold. What is so special about the cold gun?
4
How much G-Force do people transported by the Flash experience?
5
Can we establish how fast the Flash is moving in "Enter Flashtime"?
1
Does the Flash have super strength?